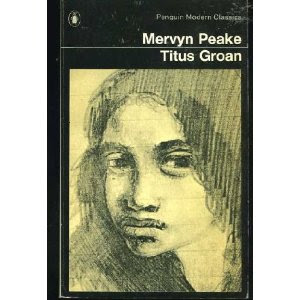 If the first part of Titus Groan is the set-up, an exposition of the setting and the introduction of the main dramatis personae, then this second instalment of the Gormenghast readalong, hosted by Jackie at Farm Lane Books, starts to position the characters and set up what promises to be a key set piece in the book, the burning of Lord Sepulchrave's library.
Some of the characters, such as Rottcodd, Sourdust and even the Earl and Countess are moved into the background, with Sepulchrave in particular beginning to fill a role as someone around whom the action revolves rather than a protagonist himself.  By contrast, the oleaginous and increasingly ominous Steerpike has moved front and centre stage and much of our second instalment is concerned with the way he stealthily claws his way up from lost kitchen boy to having a Svengali-like hold over Sepulchrave’s sisters.  Indeed, I can see a parallel between the way Peake moves his characters around the imposing stage of Gormenghast and the way that Steerpike manipulates the other inhabitants of the castle to enable his plans to come to fruition.
Another sub-plot that is slowly starting to heat up is the Flay-Swelter feud.  This one kicked off in the first instalment with Flay giving Swelter a lashing with his chain of office and is now motoring along with Swelter sharpening his knife and practising his stalking.  I am looking forward very much to seeing who is going to come out on top in this grudge match.
There’s a pleasing increase in momentum in this second part and I am now totally sucked in.  Plots are beginning to coalesce and Steerpike’s progress is dreadful in its fascination.  Lies, theft, manipulation and now arson.  What is he going to do to top that?  And what on earth is he going to do with the purloined swordstick?
What is truly impressive is the way Peake is holding my attention and interest in what, let’s face it, is a pretty unappetising collection of characters.  Even Keda, previously the most sympathetic character, is starting to morph into something much less attractive with the way she has treated her suitors on her return to the village of the Dwellers.
Actually, I wish that Peake had not bothered with the whole Keda sub-plot.  It doesn’t feel like a natural part of the book and doesn’t seem to add anything to the main narrative.  I didn’t want to bring in another Tolkien reference but I find Keda a bit like Tom Bombadil, an exercise in pointlessness, the excision of whom would not subtract anything of value from the narrative.  I now await the wrath of Keda and Tom fans everywhere!
There are a couple of other small quibbles – I find that Peake’s writing style doesn’t deal particularly well with changes of pace and Steerpike’s ascent has been a little too quick for my imagination to accept fully.  These are minor, however, and I am now thoroughly enjoying Titus Groan, something I didn’t think would happen at the beginning of the readalong.
Week two thoughts can also by found by:
Posted by Falaise at 12:27 PM

Did you know that you can shorten your links with AdFocus and get money from every visitor to your short links.

If you need your ex-girlfriend or ex-boyfriend to come crawling back to you on their knees (even if they're dating somebody else now) you got to watch this video
right away...