2,562: Shakespeare on Toast by Ben Crystal 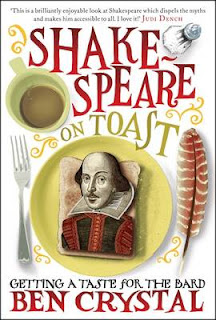 I very nearly didn’t read this book.  Having unwrapped it from its Amazon packaging, I casually gave the back cover a glance, just to see what the blurbs said and saw this quote from BBC Radio 5:
“the Jamie Oliver of Shakespeare.”
It was fortunate that there wasn’t a wastepaper bin within easy throwing range or you may very well have been reading something else on this page today.  It’s not that I have anything in particular against the aforesaid Saint Jamie of Oliver.  I appreciate that he is very well-meaning and has been prepared to put his money where his mouth is when it comes to his causes.  I’m even happy to say that he has done a great deal to improve the diets of British schoolchildren (often against their will!) and to encourage proper home cooking, something that can only be applauded in our age of ready meals and fast food.  It’s just that the cheeky chappy manner and the toe-curling catchphrases make me want to kick a hole in the TV screen.  I swear to God that if I hear the words, “pukka” or “delish” one more time, I may swallow my own tongue in disgust.
You see, Jamie Oliver is actually a very smart guy.  He runs successful restaurants, is a brand in himself and has been a mainstay of television for over a decade.  He’s nobody’s fool.  Yet, he insists on acting like a teenager.  A pretty decent teenager, I will admit, and not one of your feral hoodied yobbo teenagers but, nevertheless, a teenager.  I also feel uncomfortable when I see him being all matey and concerned on TV with people who will never even have a tiny fraction of his estimated £106 million fortune.  I don’t begrudge him a single penny of it – I just find the mateyness a bit false.
Anyway, as I said, there wasn’t a wastepaper bin to hand and so I decided to read Shakespeare on Toast rather than consigning it to the recycling.  And I’m so glad I did.
Ben Crystal is an actor and also the son of David Crystal, a renowned British linguist, who has also written about Shakespeare’s language.  As well as acting, has carved out a career in running workshops and broadcasting about Shakespeare, with the intention of demystifying him and making him more accessible to modern audiences and in Shakespeare on Toast, he attempts to do so in print.
believes that the key to understanding Shakespeare’s plays lies in an understanding of their context.  He sees the plays as, essentially, manuals, telling Elizabethan actors how to perform their parts.  If we have a small amount of background knowledge of the Elizabethan theatre and how plays were published and performed and we keep this in the back of our minds, all should become clear.
Shakespeare on Toast, therefore, gives us a quick tour of life for an Elizabethan dramatist, actor and theatre-goer to set the backdrop to Shakespeare’s plays.  It then proceeds to discuss Shakespeare’s language in an attempt to dispel the common notion that it is “difficult” for a 21st Century reader to understand.   does this very successfully, pointing out, for example, that 95% of the words used in Shakespeare’s plays are exactly the same as they are today.  He also reveals how an understanding of the use of “thou” and “you” can increase one’s appreciation of the plays.
Having dealt with Shakespeare’s language, Crystal then explains Shakespeare’s use of verse, setting out Shakespeare’s hierarchy, wherein prose sits at the bottom, tending to be used for prosaic and unemotional speech, topped by blank verse, then rhyming verse, sonnet and, finally, song.  Having explained with this, there is an extensive consideration of Shakespeare’s use of the iambic pentameter, why it is so wonderful, how Shakespeare riffs on the form like Miles Davis and, finally, how Shakespeare, known for the lack of stage directions in his plays, gives his instructions to his actors through the structure of the verse itself.
This discussion of the iambic pentameter was the real eye-opener for me.  When I was doing my Latin O-level, many, many years ago, one part of the exam paper always asked you to scan a few lines of Latin verse, to mark in the stresses and caesuras and to identify whether it was iambic pentameter or hexameter.  It is actually possible to do this with no understanding of verse or verse structure at all, provided you followed a few simple rules.  As such, the question became an exercise in deduction rather than language or literature.  ’s discussion of Shakespeare’s verse has transformed my understanding of this and I can now see exactly what I should have been seeing all those years ago.
The final part of Shakespeare on Toast has putting everything together in a fascinating analysis of one of the key speeches in Macbeth.  It’s a real tour de force.
has the knack of explaining seemingly difficult concepts in a simple and entertaining manner.  He is also clever enough to slip in plenty of Shakespeare trivia among the analysis and explanation to keep things nice and light.
I think this book is wonderful.  I have learned plenty from it and I suspect anyone other than an English literature academic would do the same.  If, in the years to come, mini-Falaise is struggling with Shakespeare, I will simply reach for the shelves and hand her this book.  I reckon it should be compulsory reading for all teenagers studying Shakespeare and so, for that, Saint Jamie of the Bard gets my vote.
Posted by Falaise at 4:03 PM

Email ThisBlogThis!Share to TwitterShare to FacebookShare to Pinterest
Labels: Shakespeare

Nice review! This sounds like fantastic read. I have to admit, when I first saw the title I was a little afraid it would be something trite and kind of dumb. I'll have to check this out.

Wow! This sounds like the sort of book I need. I've recently decided to read through all Shakespeare's works, and while I generally don't have tough time understanding him, it sounds like this book would be a really helpful tool to enjoy Shakespeare so much better!!

Red - Thanks for the comment. I was with you at first but it's actually quite a clever book posing as a dumb book.

Risa - It sounds like you would really get something out of it.

I actually though it would be a book about food at the time of Shakespeare :) But after reading your review I see where Jamie Oliver comes in (good insight into him, by the way).

Alex - Maybe Jamie Oliver could write a book on that!

Many thanks for the review, glad you enjoyed the book so... Posted here: http://www.shakespeareontoast.com/2011/06/19/a-real-tour-de-force-blog-review/

You could be eligible to receive a $1,000 Amazon Gift Card.

New Diet Taps into Innovative Idea to Help Dieters Get Rid Of 20 Pounds in Only 21 Days!