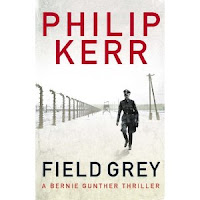 There’s a sub-set of the crime/spy/thriller genre that comprises novels set in either just before or during the Second World War.  A typical example would involve an ambiguous, morally compromised hero (although “hero” may be too loaded a word; “protagonist” may be more accurate) who tries to maintain his values amidst the political upheavals of Central Europe or the totalitarian regimes of and the .  The star writers of this sub-genre are the likes of Alan Furst, David Downing and Philip Kerr.

The hero of Kerr’s series is Bernie Gunther.  Bernie has spent much of the ‘30s as a senior officer in ’s Kripo, the police agency responsible for investigating “ordinary” (as opposed to “political”) crime.  Struggling to maintain his integrity and professionalism as the Kripo becomes increasingly politicised as the Nazis gain power, he eventually can’t stomach any more and leaves, setting up his own private detective agency.  At other points in his pre-War career, he is also Head of Security at the Hotel Adlon.

Philip Kerr wrote the first three Bernie Gunther books 20 years or so ago and, having written ten other novels and tried to break into in the interim, returned to him in 2006.  Since then, he has added a further four instalments to the series, with another, Prague Fatale, due out this autumn.  My love for this series can be seen in the fact that I have already pre-ordered a copy (and should some enterprising publisher’s PR person wish, I would be only to happy to review a pre-publication copy – I can always dream!).

Field Grey opens in the familiar Kerr style.  Gunther, who could easily have stepped straight out of the pages of a Raymond Chandler novel, is in pre-Castro , still exiled from , where he is (unfairly) wanted as a war criminal.  However, it soon becomes clear that this is not another detective story with a period setting.  In fact, the ostensible plot, the tracking down and identification of a French war criminal, Edgard de Boudel, is all but discarded and takes up a relatively small part of the book. Although I would not have minded another Bernie Gunther detective story at all, what Kerr has done in Field Grey is altogether less expected and, really quite brave.

The core of the story is the twisted relationship Bernie has with one Erich Mielke (yes, the Erich Mielke who became Head of the East German Stasi), a Communist whom Bernie rescues from a Nazi gang in 1930 and subsequently encounters during and after the War.  As the book progresses, their relationship becomes more and more important, until, by the end, it is clear that it has been the centre of the story.  What this permits Kerr to do, though, is to tell for the first time the story of what Bernie Gunther actually did during the Second World War.  Up to now, each of Kerr’s stories has been set either before or after the War and Bernie’s wartime exploits have only been alluded to.

It is brave of Kerr to do this because, you see, Bernie Gunther spent part of his War as a member of an SS police battalion on the Eastern Front. All of a sudden, Good Old Bernie, the professional policeman who kept his moral compass amidst the evil of the Nazi regime, starts to appear a lot less sympathetic.  Kerr faces up to this and, although he makes it clear that Bernie was not involved in the murder of Jews or any part of the Holocaust, objects to the atrocities being carried out in Russia and is removed from that theatre by his ex-boss, Kerr is prepared to allow Bernie to have killed Russian partisans.

This could have been a death blow for Kerr’s series.  If the tale of Bernie’s service in had been botched, Bernie’s character could have been tarnished so badly that he would no longer have been viable as the hero of the series.  Instead, he is tarnished but to a degree and in a manner that has enabled him to maintain our sympathy and engagement whilst adding another layer to the book’s central theme.

Field Grey is, at its heart, an examination of the moral grey areas that arise for individuals seeking to survive in the midst of war and the clash of totalitarian ideologies.  Bernie is a compromised man.  He ha not come out of the War wholly clean.  He has sacrificed part of his soul and his self-respect for physical survival but also for the preservation of his basic inner beliefs.  He has accepted being pushed and treated as a pawn by the forces of Nazi Germany, the , the CIA and the French but has somehow come out alive, bloodied, damaged but not destroyed.

To be honest, Kerr is not in the same class as either le Carré or even Alan Furst when it comes to dealing with moral ambiguities and there are also a number of irritating jumps and cutaways from one time and place to another, which disrupt the flow of the story.  Nevertheless, Field Grey was a gripping and interesting read and another great instalment in the Bernie Gunther saga.

One word of advice:  I suspect that Kerr originally meant the series to be the trilogy he wrote 20 years ago and so the stories jump around in terms of time and place.  Although you can read them out of order or as standalone pieces, I would recommend that you read them in order.  And read them you should.

I'll have to check out these books. Thanks for bringing them to my attention!

Thanks for the review.
Ann