2,563: The Shakespeare Curse by JL Carrell 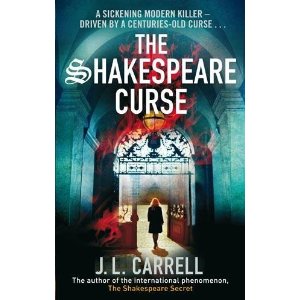 As you will know, if you read my post on JL Carrell’s first Shakespearean novel, I wasn’t overly impressed.  Nevertheless, I’ve recently been in the mood for easy, throwaway reads and so I downloaded the sequel, The Shakespeare Curse, onto my Kindle.  And you know what?  It wasn’t bad at all.

The novel centres around Macbeth, which gave it added appeal to me because Macbeth is my favourite Shakespeare play.  Carrell’s heroine from her previous book, the Shakespearean director, Kate Stanley, makes a return appearance when she is asked by Athenaide Preston, another returning character, to pay a visit to Lady Nairn, a glamorous Scottish aristocrat.

Lady Nairn, it transpires, was a famous actress before her marriage and her family home is, in fact, the very same that housed the Macbeths.  She and her late husband, Sir Angus, had amassed a collection of artefacts relating to Macbeth and, following his recent death, Lady Nairn wants Kate to direct a memorial performance of Macbeth.

Soon, the cast and crew of the play are gathered at Dunsinane, where a series of strange events occur, which Lady Nairn believes are somehow linked to her belief that Shakespeare wrote an earlier version of Macbeth than the one in the First Folio, a version that included a genuine black magic ritual.

Murder and mayhem ensues and, as in Carrell’s previous novel, the bodies start piling up and is once again propelled into a search for a lost Shakespeare manuscript.  Carrell stirs in liberal quantities of Wicca, Dr John Dee, Shakespearean trivia, occult themes and, makes good use of the alleged curse of Macbeth and Shakespeare’s lost years.

As with The Shakespeare Secret, the reader is expected to undertake a huge suspension of belief, helped only by the pacing of the book and Carrell’s characterisation is still as wooden as the Birnam oak itself.  Carrell also makes use of a number of the plot devices of her earlier novel, including the “good” character who turns out to be “evil”.  This particular device may explain some of the poor characterisation as Carrell needs to avoid making the twist either too obvious or too implausible.  There is also an unnecessary sub-plot involving her companion and sometime lover from The Shakespeare Secret, Ben Pearl, which crosses the line from pointless to annoying when his new lover is found murdered and he seems to recover from it in five minutes flat, showing virtually no grief or sadness at her death.  This was jarring in and threatened to break my ability to cope with the general implausibility of the plot.

Nevertheless, contrary to a number of other reviewers, I found The Shakespeare Curse to be a improvement on The Shakespeare Secret.  Firstly, Carrell has resisted the temptation to overegg her pudding with too much Shakespeariana, which means the plot is less cluttered.  She has also managed to suppress her pedagogical instinct and there is less exposition than in the earlier book.  I suspect that some readers may find the occult theme and, especially, the suggestion that Shakespeare had undergone a black magic ritual that gave him his talent, just a little too much too swallow.  If you come to it with the presumption that it is a fun novel and not to be taken seriously, however, you hopefully won’t have this problem.

I believe that JL Carrell is currently working on a new novel, historical this time and not featuring Kate Stanley, Ben Pearl or William Shakespeare.  While I wish her luck with that, I do hope that she returns to the Shakespearean theme before too long as, despite their flaws, her novels have been good fun to read.

Incidentally, I recently read an enjoyable mystery wherein Macbeth played a large role - Light Thickens by Ngaio Marsh. The first half of the book is a very enjoyable account of what could easily be a real theatrical production of Macbeth, which ends in tragedy during the final scene and begins the mystery.

That's a good one line summary of it!

I read the Ngaio Marsh book years ago, I think - I've read most of her stuff anyway. I might have to go back and have a reread.