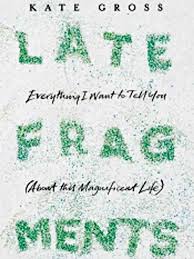 "Kate died at home in the room she'd chosen and prepared on 25 December 2014 at 6.29 am.  Ten minutes before Oscar and Isaac asked 'Is it morning?' - so just long enough for Billy to hold her hand and say goodbye before stocking-opening, which, of course, cannot be delayed."

It seems strange to me, even a little perverse, that I have physically shed more tears for a woman I never met than for my own father.  I don't know whether it's because the death of a parent leaving behind young children is inherently heart-breaking or whether the courage, honesty and warmth of this short memoir affected me unexpectedly deeply but, reading the above passage, from the book's epilogue, during a long, sleepless night recently had me in tears, wracked with great heaving sobs.

Kate Gross died on Christmas Day 2014, leaving behind her husband, Billy, and her 5 year old twins, Oscar and Isaac.  Prior to her diagnosis two years earlier with cancer of the colon, she had been one of life's achievers - a First from Oxford, an adviser to two Prime Ministers in her 20s, the CEO of a charity supporting African democracies by 30 - whilst also marrying the man of her dreams and giving birth to two children.

But cancer is an equal opportunities disease.  I have seen it take my grandfather within weeks of him being told he was in remission; it killed the gorgeous daughter of friends of ours within 6 months of diagnosis, just two days after her second birthday, and it stole our wonderful 80-something next door neighbour from his wife of nearly 60 years.  It affects all ages, genders, races and income brackets and in December 2013, after operations and chemotherapy and a brief period of remission, Kate Gross was told that there was no hope after all, that the cancer was terminal.

Late Fragments is part memoir, part musing and part instruction book for her husband, sons, parents and friends.  Kate herself says that she was "wired for happiness" and, rather than focussing on the misery of failed treatments and the sheer, awful unfairness of the hand life has dealt with, the book is remarkably warm and positive shot through with her own joy in life and the need to embrace it now, and not to wish it were somehow different:


"What happens to you, uncontrollable or otherwise, isn’t the important thing.  What matters is simply how you are with it. And you can always, always, choose that."

She writes engagingly of her own self-confessed control freakery - of organising substitute mother figures for her boys from amongst her friends and of recording Roald Dahl stories for them to hear her voice, and not forget it (and, yes, I cried here too).  But noone, no matter how strong and optimistic, can stay upbeat all the time in the face of a terminal illness and Kate is unflinchingly honest about her sadness, periodic anger and even guilt:

"I can’t shake this feeling that I am letting them all down. Wiping my parents’ decrepit bottoms in 20 years’ time was supposed to be my job."

I found the most moving parts of the book to be the sections where Kate looks forward into the future she won't see and anticipates what may happen.  She muses on her children being brought up by a surrogate mother and her beloved Billy meeting someone else:

"I want Billy to be happy and loved. I want someone to get the washing done, without the darks bleeding into the lights. If the two could combine in one washerwoman-cum-wife, ideally without my sparkling eyes and wit, perhaps I could look down on that content. But then I think about someone else … with my Billy, seeing my friends. I imagine her in my kitchen telling the boys off for some teenage incursion. My job. I am haunted by this non-existent woman."

Late Fragments could easily have become either overly sentimental or grimly downbeat and bitter but is actually a warm and thoroughly inspiring read, eschewing both unrealistic optimism and easy tearjerking.  It's full title - Late Fragments: Everything I Want to Tell You (About This Magnificent Life) - sums Kate's character up well.  The book is engaging and, in the lightest possible way, a demand for us to grab every happiness we can from life

Yes, I cried, which may or may not be down to my own newly developed sensitivity (or mawkishness) about death but it also left me feeling a need to embrace my life, to recognise its joys and to search out my happiness.   I cannot recommend this highly enough - just don't read it in the lonely hours before dawn!

This review is so accurate. I also enjoyed when Kate looked forward, although that was also the most heart-breaking aspect, especially when you consider her two sons. As someone who has also experienced a parent with cancer, Kate represents to me what would have happened to my mum (who fortunately beat the odds and survived). Here's my review if you're interested: http://readbyjess.blogspot.co.uk/2016/06/review-late-fragments-everything-i-want.html

The additional weight and leverage of the overhang make the structure extra vulnerable to collapse. By utilizing supports, you'll be able to|you presumably can} certain the} vertical components are adequately strengthened. Before moving on, lectric Pencil Sharpener it’s important to define 3D printing in laymen’s terms for the uninitiated readers.