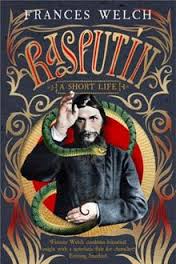 Despite (or maybe because of!) the awful '70s ear worm by Boney M, I, like millions of others have a fascination with the story of Rasputin, the hairy and insanitary but, apparently, sexually irresistible monk who came out of Siberia to wield extraordinary influence over the last Tsar and Tsarina of Russia.

There's something almost Grand Guignol-esque about Rasputin's story, retold vividly by Frances Welch in this short and highly enjoyable biography.  It's the story of a peasant from a village in the depths of Siberia who, one day, abandons his wife and children to go and stay in a monastery, from which he emerges as a religious mystic.  Traveling to Kazan and then to Kiev, he attracts the attention of high-ranking Russian Orthodox clerics, including the splendidly monikered Theophanes of Poltava, occasional confessor of the Tsar and Tsarina.  Theophanes then introduces him to the Grand Duchesses Milica and Anastasia who, buying in to his reputation  as having healing powers, recommend him to the Tsarina as being able to help the Tsarevich, Alexei, a haemophiliac.

Although there is no evidence that he really was possessed of healing powers, Rasputin did actually appear to be able to help with Alexei's illness and he rapidly becomes a favourite of both the Tsar and Tsarina.  Taking full advantage of this, Rasputin becomes notorious in St Petersburg for drunkenness and depravity, selling his influence with the royal couple for money and sexual favours from his "little ladies" and is thought to have Svengali-like influence over the Tsar and, especially, the Tsarina, whose lover he is rumoured to be.

Finally, having made enemies everywhere, he survives several assassination attempts until, on the night of 29 December 1916 (modern calendar), Prince Yusupov and Grand Duke Dmitri, two former friends and associates of Rasputin, lure him to Prince Yusupov's palace where, having got him drunk, they poison him and then, when the poison seems not to be having any effect, Yusupov and another conspirator shoot him several times before the body is dumped in the river Neva.

Rasputin's story has all the ingredients of a good, schlocky melodrama - weird mystical villain, sex, violence, aristocrats and royals and it even has its own spooky sting in the tail as, shortly before his death, he wrote Tsar Nicholas a letter, in which he predicted:


“If my death will be staged by your relatives, then none of your family members, none of your children or relatives will remain alive for more than two years. All will be killed by the Russian people. And I will be killed too. I’m not among the living anymore. Please, I beg you, be strong! Think of your blessed family.”

His death did, indeed, come at the hands of junior members of the Romanov family and, as we all know, on 17 July 1918, less than two years after Rasputin's murder, the Tsar, Tsarina and their five children were murdered by Bolshevik revolutionaries at the Ipatiev house in Yekaterinburg. 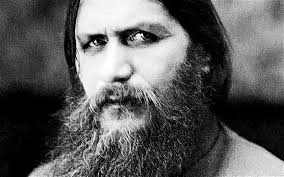 Of course, it is also this that turns Rasputin's story from melodrama into tragedy for, although blame for the October Revolution can hardly be laid at his door, his perceived influence over the royal family and, in particular, the lurid rumours of a sexual relationship with the Tsarina (and even one particularly virulent story that he had raped the Tsarina's children in their beds) became a kind of avatar for the alleged rottenness at the heart of the monarchy and helped the likes of Lenin portray revolution as a cleansing act for Russia, clearing out the corrupt aristocracy to give birth to a new order and, ultimately, the mythical ascetic New Soviet Man.  The impact of Rasputin was seen as so great at the time that Kerensky, head of the provisional government formed after the Tsar's abdication, said:

"Without Rasputin, there could have been no Lenin."

Part of the mystique that surrounds Rasputin is that there are so many stories and rumours about his life that it is difficult to know what is truth and what is fiction.  This has allowed Frances Welch the freedom to take a judicious, and at times even humorous, view of his escapades whilst writing a vivid and highly readable biography.  She interweaves the narrative with the wider story of the political struggles faced by the Tsar during the First World War, which puts the story into perspective and allows the reader to understand the corrosive effect Rasputin had upon the monarchy and, by extension, Russia.

She finishes the book with a wonderful excursion through Rasputin's cultural afterlife and finishes with a lovely bit of trivia - far from being the massively-endowed sex machine of legend, a medical examination of Rasputin in 1914 after another failed assassination attempt revealed that his genitals were so small that his doctor believed that it was unlikely he could ever, to put it crudely, "get it up".

So, there you go.  To paraphrase the great Boney M, although he probably wasn't actually Russia's greatest love machine, he was indeed a cat that really was gone and it really was a shame how he carried on.  And I recommend you read France Welch's biography to find out exactly how he did carry on.

I read a really interesting book about British spies in Russia during this time period and they had a really indepth couple of paragraphs about the night of Rasputin's demise. Spoiler alert: it involves crushed testicles.

Hi saw the name of your blog and had to visit. Was a little disappointed that you hadn't already read over 2000 books. And then I panicked when you said that at mid life we will only have so many books to read before we die. I better get busy!

Coincidentally, just last night I was considering getting a biography of Rasputin so your post is timely. I will look it up on Amazon.

He's referred to in so many other works such as Tolstoy as well as in history because of his association with the Tzars and his apparent mesmerizing affect on women. Looking at his photo I'm guessing it was his personality.

Anyway, glad to find your blog. I also post reviews and also travelogues on my blog if you'd care to visit: http://sharonhenning.blogspot.com

Have a good week!

What's your address again in the hereafter, dear?? Mine is 111 Rock-Solid-Diamond Ave, Seventh-Heaven - a quaint, stucco mansion on d'south side of town with mountain biking trails in all directions you may conform with your thots... AND, of course, a sassy, savvy, insane, party-hardy every evening. RSVP. Wanna join me? trustNjesus.

Start following our signals today & make up to 270% per day.

For every internet user, all the instruments of this world are of great importance. While the number of internet sites, game sites, news sites and much more have turned into really attractive places in this sense, the number of people using the internet for entertainment purposes is not small at all. Because of this, teenagers and children can enter play sites in their free time and be adventurous with the sweetest characters. These characters, which are very famous and so sympathetic, also take part in friv games. In the world there are sites that collect such games under one roof and offer the best quality options to the players, as well as http://friv.party/ address that offers the best games with the variety of services and offers that they provide within these sites. All the game options in this adress are made up of serious and impressive games.
Players who enter the site with the friv unblocked option, which attracts all the attention, enjoy playing games. Especially when the most sympathetic characters are chosen and the adventure is a great pleasure, the situation also tastes different emotions from every direction. Excitement, happiness and adrenaline are also experienced. In addition, since there are no annoying advertisements on the pages where all these games are found, parents are aware that their children are having fun in a safe place.
The friv site, which is prominent with both different and enjoyable game types, gives you the opportunity to have a pleasant time. In addition to that, you can also see the scores that you collect while playing with each other. It can also be seen that similar games are featured on the pages where each game is played. In other words, the most beautiful and sweetest game types are presented to the players. Offering free gaming opportunities, Friv.com is striving to please all children and young people. Now you can have fun as you like.

The most important feature of the http://friv-friv-friv.com/ site is the variety of games. The more and more easily the type of game is reached, the more time the children spend. In particular, the presence of each categorical game helps children to develop themselves in different areas. Computer games are extremely important for the mental development of children under a certain age. For this reason, children sometimes develop themselves by playing skill games and sometimes adventure games. Especially skill games teach children patience and ambition. Patience is a good feeling when used in places where it is needed. One of the greatest influences of children getting such an important emotion during these ages is the games played at a young age.
Among the most interesting games among friv unblocked are games that are usually based on adventure and progressive games. Especially in progressive games, children have fun. Every passing chapter causes a new excitement on the children. If these games are also played in a friend's environment, they will have a lot of fun. Friv site is a website where such games are found. Many games are offered to gamers of all ages through this site. There are games on site that everyone can easily play and enjoy playing.
How to play games The answer is quite simple. You can reach Friv site as easily as a click. Immediately after entering the site, there will be dozens of games. This is enough to play on click on any of the games. The games are divided into categories.
The best friv games vary according to the perception of the person. It is possible for everyone to find different games according to their interests. In general, the gry friv appeals to everyone's understanding of the game. The best thing that can be done about Friv.com is that it will be installed in games that appeal to everyone. Children will not get bored at all when playing friv.

Your posts are my cup of tea. I'm interested in your articles. I always read them everyday and wait for incoming ones. It's because your posts are interesting.
What do I say about your posts? I love them. I read them everyday and always wait for new ones. I am very happy because I have something interesting to read. Hope you can upload more and more.
Formula Drag free games!
Friv4 for school || abcya 2020 games|| Friv10 games online|| Friv classic games online||abcya-3 games||friv 2021 games