2,215: The Monogram Murders by Sophie Hannah 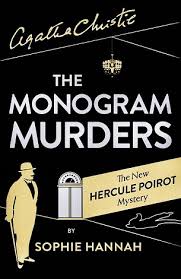 As I seem to recall having written before, albeit in different ways, literary resurrections can be something of the proverbial curate's egg.  Whilst some of the Bond revivals (which have been ongoing since the first John Gardner "continuation" novel) have been excellent, others have been limp and formulaic.  Sebastian Faulks made a valiant attempt at a Jeeves and Wooster novel but, at least to me, was always doomed to fall just short.  On the other hand, I am told that many of the continuation Mapp and Lucia novels are a joy.

Despite the recent rash of literary licences and continuation novels, Agatha Christie's literary executors had long held out against the phenomenon until, in 2013, it was announced that acclaimed crime writer Sophie Hannah had been commissioned to write a "new" Hercule Poirot novel.  Cue outrage from Christie fundamentalists, paroxyms of joy from other Poirot fanatics (what would the Poirotesque version of a "Cumberbitch" be called, I wonder?) and a predictable avalanche of hyperbole from the publishing and literary PR worlds.

Having previously been guilty of letting the hubbub surrounding a hyped new book affect my judgement of it (and here I cite Madeline Miller's The Song of Achilles as exhibit one in the case against me), I decided to bide my time and display (as an unabashed Christie fan) Zen master-like patience, in waiting until recently to read The Monogram Murders.

And you know what?  It's really rather good.

Set in the winter of 1929, we find Poirot having taken up residence in a boarding house, seeking a period of respite from the gruelling business of detection.  Unluckily, maybe, for Hercule, Edward Catchpool, a young Scotland Yard detective, is also a resident.  Catchpool has been assigned a new and baffling case: three bodies found dead in separate rooms in the same West End hotel.  Each has been careful positioned after having been poisoned and a monogrammed cuff link has been placed in the month of each victim.  As one might guess, such a curious scene is irresistible to Belgium's finest, especially once he surmises that cuff links usually come in pairs and that the absence of the fourth cuff link may suggest that a fourth killing is in the offing.

It's a classic Christie set-up and Hannah uses a number of Christie's favourite motifs and tricks throughout the novel.  Poirot's investigation expands to include a reinvestigation of a separate death 15 years earlier (Five Little Pigs); Catchpool is a reasonable facsimile of the Hastings/Japp sidekick role; and Hannah, a psychological crime writer by trade, makes of Catchpool a far more rounded figure than either of Poirot's erstwhile sidekicks.  She gives real depth to his inner thoughts and insecurities, to the point where I sagely nodded my head, saying, "The Murder of Roger Ackroyd" to myself.  Was I right?  You'll have to read it and find out for yourself.

But, with a character as iconic and ask over as Poirot, the nub of the thing is always going to be: Does she get Poirot right?  And I think the answer is, pretty much, yes.  There is a school of thought that maintains that Poirot was never a fully realised character but merely a detailed assemblage of quirks and characteristics, really just an entertaining delivery vehicle for the solution of the mystery.  If this is your view, then Hannah ticks all the boxes.  From his OCD-like love of order, to the random use of French and his sentence structure, the surface Poirot is present and correct.

If, on the other hand, you agree with David Suchet and other lovers of Poirot that, despite the quirks and character tics, Poirot is a humane and developed character, concerned not just with the solution but with the concept of justice, then you should still be satisfied with Hannah's rendition of the character.  My only slight reservation (and, should you be interested, I come from the Suchet school  on Poirot), is that, at times, Poirot's dialogue seems not quite as alive as in Christie's originals.  I can't quite put my finger on it but I never felt that this could have been Poirot written by Christie.  It wasnt a big thing and it didn't spoil my enjoyment of the book - it just wast quite as good as some of Christies's best Poirot's.

As Hannah also inserts a goodly quantity of Christie style clues and red herrings and has created a satisfyingly twisty plot, although her writing style is more complex than Christie's and, I would claim, better than Christie's, this is recognisably a Hercule Poirot novel and a satisfying new "fix" for fans of Christie.

It's not perfect, of course.  As I have mentioned, Hannah's style is more complex than Christie's and, although this could, under normal circumstances, be seen as a good thing (and Hannah is a highly talented writer), in The Monogram Murders, it, perversely, serves only to highlight Christie's real genius - her deceptive simplicity.  The best of Christie's crime novels manage to deceive the reader and to divert one's attention from her clues within a very clean structure, without sub-plots or unnecessary intricacy.  Everything is there on the surface and yet supremely hidden so that, when the denouement takes place, somehow it's all so blindingly obvious.  Hannah's plot, although enjoyable and satisfying, lacks this simple intricacy, which I think is much more a tribute to Christie than a criticism of Hannah.

Finally, and this is my biggest issue is that I just didn't quite believe in the premise of the solution.  One of Christie's qualities was that, despite the totally unrealistic circumstances of some of her novels  (Death on the Nile and Murder on the Orient Express spring to mind), the solutions seem both logical and, at least once we know them, obvious.  Here, I felt as if i were being asked to stretch to accept the premise on which the solution was posited.

Still, I really did enjoy The Monogram Murders and think Sophie Hannah has done a wonderful job in producing a readable and satisfying Poirot novel.  I'd certainly read more Poirot by Hannah and the fact that The Monogram Murders doesn't quite have Christie's peculiar genius to it is no criticism at all.

Very interesting review. I am a huge fan of Sophie Hannah and of Agatha Christie and was really looking forward to this, but sadly did not enjoy it very much, which was disappointing. I thought it confusing and unconvincing! As for continuations, may I recommend The Black Eyed Blonde by Benjamin Black? Brilliant Raymond Chandler impersonation, excellent novel all round.

Thanks, Harriet. I will certainly check your recommendation out! I can certainly see where you are coming from on The Monogram Murders - I do think it could have been stripped down a bit.

Start following our trades NOW & make up to 270% per day.

I have bookmarked your website because this site contains valuable information in it. I am really happy with articles quality and presentation. Thanks a lot for keeping great stuff. I am very much thankful for this site.
Abcya games 4 school
friv online Games the best online Games
frivland.blogspot.com