2,444: The Headmaster's Wager by Vincent Lam 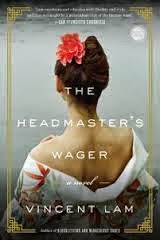 The Headmaster’s Wager, Vincent Lam’s debut novel, is set in Cholon, a small market town outside Saigon with a substantial ethnic Chinese population.  One of the most prominent members of this community is Percival Chen (or Chen Pie Sou), the owner and headmaster of the Percival Chen English Academy.  Percival is convinced of the superiority of the Chinese and fixated on the preservation of his heritage and objects strongly when his son, Dai Jai is seen consorting with an Annamese (Vietnamese) girl.

Unfortunately, for all concerned, Dai Jin decides to demonstrate his Chinese patriotism to his father by staging an act of disobedience that comes to the attention of the Vietnamese authorities.  Chen, assisted by his mysterious assistant Mr Mak, decides to get Dai Jai out of the country and back to China in order to keep him alive.  More unfortunately, this results in Percival incurring massive debt (including to his ex-wife, Cecilia, whose maternal instincts do not cloud her materialism).  Most unfortunately, the year is 1966 and Chen ends up sending his son into the maw of the Cultural Revolution, maybe not the best place for the son of a successful businessman.

Lam’s story is epic in nature, telling a family saga that stretches from early 20th Century China, from where Chen’s father, like so many Chinese, emigrates to seek “the Golden Mountain”, to the fall of Saigon in 1975.  It tells Chen’s story by mixing flashbacks to Chen’s early life with the central plotline, combining elements of political thriller and romance.

Chen is, essentially, a survivor, prospering through the Japanese occupation of Hong Kong where he has been sent to school, the French occupation of Indo-China and the Vietnam War, first as a rice merchant and latterly as headmaster.  Cash is his king and he believes that business and political neutrality will help him and his family and employees survive whatever the ruling regime may be.

This belief, aided and abetted by his racism and almost wilful blindness to what is going on around him eventually prove to be one of the two causes of his downfall as the power of money is ultimately trumped by the ideology of the Viet Cong and North Vietnamese Army and he is deprived of Mak, his secretive long-time friend and protector.

His other major problem is his breathtaking hypocrisy.  On the outside, Chen is a figure of propriety, a prominent local businessman and member of the community, wielding influence through a combination of contacts and liberal use of the red envelopes of cash that he uses to grease the wheels of his life (with the help of Mak).  At night, however, he is a compulsive (and impulsive) gambler and whore-monger who is a regular in the fleshpots of Cholon.  Even the wager of the book’s title is an example of his hypocrisy as he wins the “affections” of Jacqueline, a métisse (or mixed-race) prostitute in a game of mah-jong.  This turns into a long-term relationship that challenges his racial superiority complex.

Themes of betrayal and duplicity abound throughout The Headmaster’s Wager with characters turning out not to be who they claim to be (although Mak’s true identity is pretty well telegraphed).  I can’t help seeing the central theme, however, as being the lengths that people will go to to survive and protect their families and dependants in turbulent and violent times.  Compromise and corruption are endemic and the ending suggests that staying neutral in the face of warring forces is not always a viable option.

Lam writes well and creates a compelling and believable portrait of Vietnam; I could almost smell, feel and taste the atmosphere – the mah-jong scene in which Chen wins Jacqueline, the Tet banquet and a particularly nasty torture sequence stand out.  His plotting and structuring are also excellent and the panoramic sweep of his story makes for a meaty, page-turning read.  It’s a very good book indeed.

The one thing that stops me from being even more gushing, though, is Percival Chen himself.  Although blessed with love for his family and real generosity to his employees, Chen’s self-satisfied sense of superiority and awful naiveté lead to a frustrating level of passivity; he is constantly being prodded into action or told what to do by Cecilia, Jacqueline and Mak in particular and only his impulses bring any pro-activity out of him.  Of course, this of itself isn’t necessarily an issue but the lack of change and growth in Chen makes him an increasingly unsympathetic individual and, although as I say, I enjoyed The Headmaster’s Wager a lot, I found myself almost completely indifferent to Percival’s own fate by the end of the novel.

I would like to finish by thanking Crown Publishing, under whose Hogarth imprint, The Headmaster’s Wager, for sending me a review copy.
Posted by Falaise at 2:18 PM