2,442: The War That Ended Peace by Margaret MacMillan 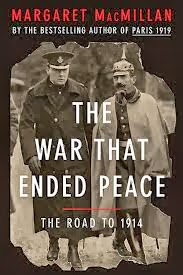 One doesn’t have to be Mystic Meg to make a decent fist of creating a publisher’s calendar for history books over the next few years.  Heading into next year, we will begin marking the centenaries of the events that shaped the 20th Century and that are amongst the most fascinating of modern history.  As well as the First World War, there will be major anniversaries of the Bolshevik Revolution, universal suffrage, the founding of many European countries, the Wall Street Crash and the Great Depression, before we move into commemorating the Second World War and the Holocaust.

The main focus of the next four years, however, will inevitably be the First World War and, with almost a year remaining until August 1914, there is already a veritable slew of important and high quality books hitting the shelves.  As well as Sean McMeekin’s excellent July 1914, Christopher Clarke has produced The Sleepwalkers, Max Hastings’ Catastrophe is in the best-seller lists and Kate Adie and Richard Evans are amongst a number of writers who have authored books focusing on aspects of the War.

It’s hardly surprising really.  The First World War was, arguably, the most significant event of the 20th Century, causing a fundamental shift in the balance of power between Europe and the United States, helping bring Lenin to Power in Russia, destroying four empires (Germany, Russia, Austria-Hungary and the Ottomans) and setting the scene for the rise of Fascism and Nazism.  Although it is an oversimplification to paint pre-1914 Europe as a kind of pre-lapsarian paradise, it is true to say that nothing would ever be the same again.

One of the most fascinating aspects of the Great War is the fact that the great European powers appear to have walked almost blithely into war, without any real moral compulsion.  By comparison the causes of the Second World War are both clearer and more easily acceptable – it was much more obviously a Manichean struggle of good versus evil, whereas it is plausible to argue that none of the combatants in the First World War had a compelling moral ground for war.

Generally speaking, since the 1960s and the emergence of Fritz Fischer and the group of other German historians who argued that the War had indeed been planned by an aggressive Germany, the debate has been framed as a blame game.  It is a sign of the complexity of the issue that almost every major combatant has been accused of responsibility – McMeekin blames Russia (with a side-swipe at France), Clarke points the finger at Serbia, Max Hastings sides with Fischer in putting Germany in the frame whilst Niall Ferguson thinks that Britain was the guilty party.

Rather than picking a horse in this unedifying race, the excellent Margaret MacMillan comes at the issue from a different angle and poses the question – why did Europe choose war rather than peace in those fateful days in July 1914?

If this just seems like another way of asking who was to blame, look at it more as a question of why the political and diplomatic systems of Europe failed to address tensions without resorting to war.  For, as MacMillan concludes, war in 1914 ultimately boiled down to a failure of the politicians and diplomats both to resolve these tensions and to control the military men.

MacMillan is an excellent narrative historian (as amply demonstrated in Peacemakers, her book on the Paris Peace Conference, which is one of my favourite history books of all-time).  In The War that Ended Peace, she skilfully tells the story of Europe’s march to war, beginning with Germany’s doomed naval arms race with Great Britain.  Although never actually blaming Germany for the outbreak of war, MacMillan draws out the rare ability of the Kaiser and his successive Chancellors to achieve the precise opposite of their aims with truly incompetent diplomacy and statecraft.  As well as the arms race, this is most impressively shown in MacMillan’s description of the first Moroccan crisis in 1905.  Intended to drive a wedge between Britain and France during the infancy of the Entente Cordiale, Germany managed to draw the two powers more closely together, tacitly expanding the Entente to encompass military cooperation.

Another major causal factor was the failure by the European powers to see that the system of alliances that grew up during the 1900s effectively to replace the old Concert of Europe could be perceived by their opponents as threatening rather than as the purely defensive structures they were intended to be.  Professor MacMillan also highlights the truly astonishing extent to which those in power came to believe and accept that war was both inevitable and, for many of the military leaders, even desirable.

This might have been manageable if it were not for the fact that, having survived a number of crises (notably twice over Morocco and numerous times over the Balkans) without major conflict, civilian leaders assumed that their opponents would back away from the brink of the abyss and, in doing so, allowed militarism and the power of the military leaderships to grow.  When this combined with the inflexible military plans that Germany, amongst others, had adopted and the pressures imposed by mobilisation requirements, all that was needed was a spark to light the tinder.  This was fatefully provided by Gavrilo Princip and fanned by Germany’s blank cheque to Austria, the drive and fatalism of Austria’s von Hotzendorff and the refusal of the German general staff to contemplate mobilising against Russia alone rather than both Russia and France.  The final nail in Europe’s coffin was the decision by Germany to violate Belgium’s neutrality, thereby completing Britain’s hesitant entry into the conflict.

MacMillan repeatedly compares the political leaders in Europe unfavourably with the JFK of the Cuban Missile Crisis, pointing out that, at a similar crisis point, he had made choices that led to peace and not war.  Although there is little to credit the Europeans for, I find the continued comparison a little unfair – Kennedy was dealing with a single opponent in a relatively straightforward scenario.  By contrast, Europe contained five roughly comparable powers, with a range of mid-level players capable of having an impact and all of these had their own internal issues to deal with as well as the international issues (MacMillan also points out the nascent power of public opinion even in the more autocratic nations).  I would submit that the overall state of play was much more complex.

As well as being an excellent, balanced and highly readable account of the years leading up to the outbreak of war, The War that Ended Peace shifts the argument away from the usual blame game.  Although critical of the individual decisions of the nations and individuals concerned, MacMillan refrains from pointing the finger at one single country, saying:

“The most we can hope for is to understand as best we can those individuals who had to make the choices between war and peace.“

In the end, those choices led to war and to the death of 16 million people and a further 20 million casualties.  At the end of The War that Ended Peace, MacMillan summarises what happened to many of the key actors during this period.  It is depressing to read just how many of them ended their lives in peaceful retirement or without punishment or suffering.  It is equally chilling to read that Gavrilo Princip, the man whose assassination of Archduke Franz Ferdinand was the catalyst for war, felt and expressed absolutely no regret for what he had done.

I’d like to thank Random House for allowing me to read The War that Ended Peace via Netgalley.