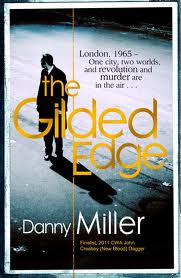 The Gilded Edge is Danny Miller’s second novel featuring Metropolitan Police detective Vince Treadwell but the first I’ve read.  In truth, I probably would never have come across it but for its publisher, Constable & Robinson kindly sending me a review copy, for which I’m terribly grateful, both for the fact that I enjoy receiving books for review and for the fact that it’s simply an excellent crime novel.

Set in pre-summer of love (but after the year sex began according to Larkin), events in The Gilded Edge take place in a London that is dark, edgy and bubbling with social revolution.  Two separate murders take place on the same night but in very different circumstances.  Jonny Beresford, aristocrat, investment banker and socialite gambler, has been found shot in the basement of his Belgravia residence, surrounded by empty champagne and hash.  A few miles away, in downmarket Notting Hill, a black nurse is found in the hall of her block of flats with the back of her head bashed in by a frenzied hammer attack and her young daughter hiding under a bed upstairs.

Although the murders initially seem unconnected, Vince’s investigations begin to uncover connections between the two and, defying pressure from his bosses, he starts digging into the affairs of a group of wealthy and connected members of the Montcler Club, a Mayfair gaming club and, in parallel, the affairs of a Jamaican gang and its boss, a wannabe Malcolm X.

As well as being tightly plotted and peopled with vivid yet believable characters, Miller’s strength lies in his descriptive ability - the violence feels real, the brothels seedy and his sense of place and time is immaculate.  I’ve thought for a long time that there are certain authors who can convey a true sense of understanding and feeling for a specific place and, when it comes to London Miller seems to be one of those writers - like Dickens, China Miéville, Christopher Fowler and Peter Ackroyd.  The Gilded Edge simply oozes with London atmosphere.

Miller’s version of ‘60s London is a wonderful swirling kaleidoscope of violence, sleaze, corruption and poverty contrasting with wealth, sophistication, colour and the explosion of creativity and hedonism that marked the birth of the Swinging Sixties.  We meet the aristocrats “roughing it” for fun, the working class looking to move on up, the West Indian immigrants adopting a political consciousness from the USA, the Soho and East London gangsters and the grand clash and cross-fertilisation of British sub-cultures that came about from the breakdown of traditional boundaries.  Miller does brilliant job of capturing all of this, resulting in a densely packed novel.

Vince Treadwell, Miler’s hero, is one of those working class young men on the rise.  He wears sharp suits, mixes happily with the toffs, is a bit “handy” and has a moderately rebellious and independent streak about him.  All of this makes him an appealing and interesting protagonist, especially when the narration is as sardonic and blunt as Miller’s.

Miller clearly has a real knowledge of the period and uses this liberally in the book.  In particular, the Montcler Club and some of the central characters in the book are closely based on the Clermont Club (do you see what he did there?), notorious for having Lord Lucan as one of its leading lights.  Lucky himself is one of the main characters in The Gilded Edge and Miller doesn’t paint a pretty picture of him.  Another of the characters, Jimmy Asper is a clear analogue for John Aspinall, the owner of the Clermont, right down to the interest in wildlife and the private zoo.  The late Lord Goldsmith also has a starring role as financier Simon Goldsachs (spot the double play on words in his surname).  Although spotting the references was fun, the thinness of some of the disguises began to get a little in the way of the plot.  This is a minor gripe, however, and I loved the cameo roles Miller gave to people like Brian Jones and Billy Hill.

Although it’s not perfect (there’s a couple of minor anachronisms), this is a damn fine thriller that deserves to sell by the bucketful (and, frankly, is screaming out to be made into a film by Guy Ritchie!).
Posted by Falaise at 4:00 PM

Follow our signals NOW and make up to 270% per day.

If you need your ex-girlfriend or ex-boyfriend to come crawling back to you on their knees (no matter why you broke up) you have to watch this video
right away...

(VIDEO) Want your ex CRAWLING back to you...?