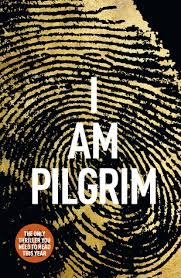 It’s been billed as “the only thriller you need to read this year” and, ignoring the issue of where the emphasis should rest in that statement, it’s a pretty big and ballsy claim, especially when backed up with a big publicity campaign and some pretty decent word of mouth.  So, does I Am Pilgrim live up to it.

Well, not quite, although that’s not to say that it isn’t a good read.  It’s just that it’s not so much better than other thrillers I’ve read this year that it quite warrants the hyperbole.

I don’t particularly want to say a huge amount about the plot as, firstly, it’s pretty convoluted and so any synopsis will either not do it justice or will be too confusing to be of any value.  Secondly, I did like the way the author develops the plot from a really skilful opening scene onwards - although certain passages of the book can appear a bit standard thrillerish, the overall story arc is not so predictable.

So, I’ll just restrict myself to saying that the book opens in a down-market New York hotel room where the NYPD have discovered a young woman gruesomely murdered and disposed of in a bath of acid.  All forensic evidence in the room has been removed or destroyed.  It looks like the perfect murder, a fact that disturbs a civilian observer of the scene.  Why?  Because he has, quite literally, written the book on how to commit the perfect murder.

Intrigued?  Well, from this beginning the reader is taken on a breakneck-paced journey which takes in three continents, several more countries, over thirty years of history and at least three sub-plots, all whilst jumping from action scene to puzzle-solving and from the hero’s point of view to the villain’s perspective stuff.  It’s heady, adrenaline-pumping stuff and, given that the book runs to around 700 pages, it’s credit to the author that it never drags or sags.

The author, Terry Hayes, is actually a Hollywood screenwriter (I Am Pilgrim is his debut novel) so it probably shouldn’t be a surprise that his command of action is so good or that I Am Pilgrim has an action film flavour to it as his credits include Mad Max 2 and Payback.

Although Hayes occasionally dips into the bag of thriller clichés - there are a few stock thriller character types and some of the main characters are given butch sounding nicknames - on the whole the plotting and the characters are believable and capable of holding the reader’s attention.  I would point out that the ethical systems and decision-making of some of the main characters including, notably, Pilgrim himself, the book’s hero, inhabit the grey areas of life and some readers who prefer a less utilitarian outlook from their action heroes may find Pilgrim unsympathetic.

Personally, after getting used to it, I found Pilgrim’s way of thinking rather refreshing, especially as it came as part of a conflicted and morally troubled character package that made him a more original and interesting protagonist and the ways in which Pilgrim and his antagonist, Saracen, had developed from their troubled childhoods formed a nice contrast and sub-theme.

I’m not sure if there’s a particular message to be gleaned from I Am Pilgrim but there seemed to be a clear undertone that America has a right to deal with its perceived enemies in whatever way it thinks fit which might have been offputting had it not been for the fact that it also seemed to be pointing at Pilgrim and saying,” and this is what can happen to those caught up in our fight against our enemies.”

Look, the bottom line with I Am Pilgrim is that it’s a high octane thriller with an excellent plot, some well-developed characters and enough originality to lift it well above most of its competitors.  It had me sitting up late at night and eating my lunch away from my desk as it was so gripping and that’s got to be a good thing.

I'd like to thank Transworld for allowing me to read I Am Pilgrim through Netgalley.
Posted by Falaise at 4:36 PM

Thanks for the reviews, which I enjoyed reading. I probably will not read this book, as I rarely read books that make my heart race and f*** with my mind, but I love reading spoilers and such about said books so that I can nod knowingly when these books come up in conversation.

If you are looking for a reputable contextual ad network, I recommend you try Chitika.

Start following our signals right now & make up to 270% a day.