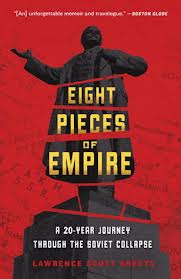 The difference, of course, is that Sheets was a serious language student who went on to live and work in various parts of the Soviet “inner” empire, reporting on many of the ethnic conflicts and political disputes that arose in the years after Mikhail Gorbachev’s formal dissolution of the USSR on Christmas Day, 1991.  Me?  Well I was a teenager on a school trip, more intent on ensuring that the hotel bar stayed open long enough for us to get trollied every night than on the internal workings of Russia.  And I was never going to become a de facto war reporter.

Eight Pieces of Empire is divided, as the title hints, into eight sections dealing with different aspects of the collapse of the Soviet Union.  These include Georgia’s dispute with Abkhasia and then Russia itself, the Chechen struggle against Russia, the Armenian-Azerbaijani conflict, the new “sultanates” of central Asia and post-Chernobyl Ukraine.

I’m happy to say that I found it a fascinating book and I raced through it.  Given the sheer size and complexity of the former Soviet Union, Sheets was only ever going to have been witness to a fraction of its post-collapse life and Eight Pieces is a little like a pointiliste painting, where individual anecdotes sit together to make up a larger picture when one steps back to take an overview of the whole.  By telling the stories of people caught up in the post-imperial seizures of the USSR, Sheets has drawn a compelling picture of the FSU’s recent history.

I would point out that most of the book deals with the Soviet periphery and little deals directly with Russia itself.  Driven by Sheets’ journalistic assignments, it cannot deal with everything and so there is almost nothing on the wholesale theft of Russia’s resources by Yeltsin’s and Putin’s cronies or about Putin’s rise to power and his gradual undermining of the rule of law and reversion to repression.  This is a book that focuses on the warlords of the Caucasus and the new dynasties of the likes of the Aliyevs and the Nurabayevs in central Asia.

It’s also a memoir of Sheets’ life as a correspondent and, compelling as his reporting is, his personal reminiscences are just as fascinating as are his kaleidoscopic group of contacts and acquaintances.  It’s also sobering to read of a series of his friends dying as a result of the conflicts they are reporting on or otherwise caught up in.

For, ultimately, no matter how exciting the action seems or how much humour Sheets manages to extract from the situations he finds himself in, much of Eight Pieces of Empire deals with human tragedy, of innocent deaths, of the destruction of homes and the displacement of families.  The consequences of the artificial imposition of boundaries and the forced deportations and resettlements ordered by Stalin are still being played out and, without Communist repression to restrict them, ethnic and national resentments have led to war and misery.

There’s not a great deal of hope or optimism here.  Most of the conflicts on which Sheets has reported have not really been resolved and there are still more, in places of which we in the West have never heard, that are still to come.  Sheets himself has, by the end of the book, grown weary and, maybe, even a little traumatised by his experiences.  It is salutary to note that he has given up journalism and is now the director of the South Caucasus Project for the International Crisis Group, a conflict prevention organisation.
I was sent a copy of the paperback edition of Eight Pieces of Empire by the publishers, Crown, for which I am very grateful.
Posted by Falaise at 5:40 PM

Order a Sparkling White Smiles Custom Teeth Whitening System online and get BIG SAVINGS!
* Up to 10 shades whiter in days!
* Results Are Guaranteed.
* Better than your dentist.
* Same strength as dentists use.