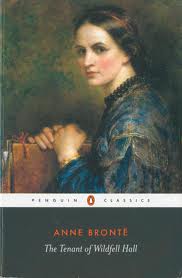 When The Tenant of Wildfell Hall popped up as one of the next five in my 1,001 Book Challenge, I have to confess that I was definitely underwhelmed by the thought of it.  This may have been exacerbated by the fact that the Random Number Generator had only just thrown up Claudine’s House by Colette, a memoir by one of my least favourite authors ever.  So, having failed to get past page ten of that one, I would have put a big chunk of money (or at least a fiver) on me failing to get much further into The Tenant of Wildfell Hall……….

……….which sum of cash I would have proceeded to lose.  No, I’m not going to proclaim that I’ve seen the light when it comes to the likes of the Brontë’s or Austen or that I’ve joined the serried ranks of their fans in blogland but, having lost my Victorian female author virginity (figuratively only, I should point out), I’m prepared to concede that it wasn’t too much of a hardship to finish it and, moreover, I won’t be dreading the next one to come up in the reading plan.

For those of you out there who are unfamiliar with it, The Tenant of Wildfell Hall is a melodramatic tale of spousal abuse, frustrated love and the abominable marital mores of early 19th Century England.  It is documentary in form, in part epistolary and in part diary.

As told by its main narrator, Gilbert Markham, it concerns a mysterious widow, Helen Graham, who, unannounced, comes to live with her child in part of the run-down Wildfell Hall, a property owned by Frederick Lawrence, a local squire.  This being the countryside, her solitary life soon gives rise to all sorts of malicious rumours which Gilbert, having fallen in love with the said Mrs Graham, refuses to believe.  Continuing to press his suit, he is rejected and, having accused her of loving Lawrence, is given Helen’s diaries which explain not only the nature of her relationship with Lawrence but also how she has come to be at Wildfell and why she cannot marry Markham.

Without wanting to spoil the story for any of you who have not read it and may wish to do so, it turns out that Helen, whose real name is Helen Huntingdon, is the victim of vicious abuse and betrayal by her husband from whom she has run away to save both herself and her son from his calumnies.  Now, what with this being the 19th Century and all, this would have been scandalous in the extreme as children were considered to be the property of the father and, what’s more, married women were not legally allowed to own property in their own name or to petition for divorce.  And, had the knowledge of Helen’s absconding become public knowledge, Mr Huntingdon would have been socially embarrassed, not so much because of his behaviour but more because he would have been seen as having been disobeyed by his wife and as having required her to earn her own living.

Eventually, of course, all ends well for Gilbert and Helen as Mr Huntingdon dies and a chance meeting ends in them professing their love for each other and, ultimately, getting married and living happily ever after, as they say.

On its publication, The Tenant of Wildfell Hall was an instant bestseller, successfully shocking polite society and it was so controversial that, after the first edition sold out, Anne’s sister, Charlotte, had the reprint suppressed.  The book is seen as one of the first feminist novels and, given the way it treats Helen as a character and the way it deals with the legal consequences of marriage at that time certainly supports that view.  Indeed, almost all the male characters are either wicked, weak or carry some other character flaw.  Even Gilbert, the male hero, is a tad self-obsessed and a bit of a prig.

Even so, the reality is that, other than Helen (who is almost a caricature of a “perfect” woman), the vast majority of the female characters are also a pretty hopeless bunch.  Helen’s aunt is continually trying to push her younger female relatives into bad marriages, Eliza (the former object of Gilbert’s affections) is a spiteful little cow, most of Gilbert’s female acquaintances and family are gossips and that’s even before we get into Lady Lowborough, Mr Huntingdon’s lover and a thoroughly unpleasant specimen.

Personally, I believe The Tenant of Wildfell Hall is a forthright attack on the egregious marital politics of the time and also an overtly Christian tract, with the excessive piety of Helen being ultimately richly rewarded with a happy marriage, great wealth and the preservation of her son’s good character.  By comparison, those who have displayed un-Christian values and behaviour (gluttony, debauchery, slander, vanity, adultery etc.) all seem to get their come-uppances.

It was an interesting light on the prevailing codes of behaviour of the time, both in terms of the explicit sexism of most of the male characters and the complex demands of social intercourse and, I will confess, I was made to keep turning the page to find out what happened next.  But, as a novel, it really wasn’t to my taste.  As well as the overly-melodramatic tone of the writing and plotting and the too neat and tidy ending, I found the whole premise frustrating and most of the characters cartoonish and one-dimensional.

I suspect I am just too set in my beliefs and too much a product of my own time but I found the behaviour of both Helen and Gilbert to be both unbelievable and incredibly annoying.    I struggled with the idea of a woman not being able to move out, initiate a divorce and obtain financial relief.  I struggled even more with the part where Mr Huntingdon becomes ill and she goes back to him to nurse him.  Really?  Even allowing for the period in which the story is set, would anyone really act like that?

Although I can see why it’s a great book to study as there are many themes and issues that can be extracted from it, and although I can appreciate why it is loved by many, it didn’t really do it for me.  I’m glad I’ve read it and it has taught me that the Brontë’s are not as unenjoyable as I had feared but I doubt I will ever pick it up again - unless mini-Falaise has to read it at school!
Posted by Falaise at 12:37 PM

I'm not a huge fan of the Brontes (Austen is another story), but I've been meaning to read this one for years, and I bought a copy last year but didn't get around to reading it. Your review makes me think I should move it up the pile.

I don't think the Brontes or Austen for that matter are ever really going to float my boat but I was surprised that I didn't dislike it more! Hope you enjoy it.

Enjoyed your post. I've always been fond of this lesser-known Bronte work - its been many years since I've read it but now I want to revisit it. Thanks!

Follow our signals NOW and gain up to 270% per day.