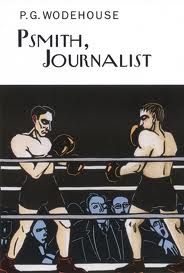 I do believe that, given the glorious Wodehouseaness (d’you like my neologism?) of Psmith as a character, the Psmith novels comprise a very rum collection.  Taking them in order, Mike and Psmith only introduces him in the second half and is really the ending of his boarding school phase.  Psmith in the City is the closest Wodehouse ever really got to autobiographical writing (and is by far the best Psmith novel.  Psmith, Journalist we will turn to shortly and Leave it to Psmith is as much a Blandings novel as a Psmith novel.

So what is Psmith, Journalist’s peculiarity?  On the surface, it seems a typically Psmithian plot.  Accompanying Mike Jackson on his cricket tour of the east coast of the USA, Psmith happens to come across one Billy Windsor, editor of a particularly saccharine weekly magazine.  With typical gusto, Psmith appoints himself Billy’s assistant, sacks the magazine’s dreadful columnists and sets about transforming the magazine into a crusading investigative publication.

In pursuit of this, Psmith and his new friends begin a campaign against one of the Rachman-like slum landlords and the condition of his tenement empire.  This set up leads nicely into a lively series of capers involving boxers, gangsters and other assorted characters.  All in all, a worthy Psmith plot and, seemingly, a classic Wodehouse story.

And yet, Psmith, Journalist is unusual.  You see, one of the hallmarks of Wodehouse’s work is his steadfast refusal to engage with the real world and real world issues.  In many ways, it can even be difficult to put a date on any given Wodehouse book just by reading the text.  His last books still inhabit the same golden fantasy England of his first novels.  Granted, there is the occasional reference to changing times and the odd character, such as Spode, an explicit dig at Oswald Mosley’s Blackshirts.  But, on the whole, social and political issues are strangers to the pages of Wodehouse.

Apart from in Psmith, Journalist, that is.  In this one book, Wodehouse raises and tries to deal with the social ills of slum housing in New York where, even at this relatively early stage of his career, he was spending much if his time.  There is one passage in particular, where Psmith and Billy are walking through a tenement, in which even Wodehouse’s light, humorous style cannot disguise the outrage.

And guess what?  It doesn’t really work.  Of all the Psmith novels, even taking into account their respective oddities, Psmith, Journalist is clearly the weakest.  Wodehouse’s talents simply do not lend themselves to serious matters.  The outrage is smothered in the writing and he just isn’t able to make the bad guys really bad.  So it becomes too  un-Wodehousean to be funny and too Wodehousean to be a serious novel.

Unfortunately, there’s more.  For someone who spent a lot of time in the US (and who would later live there and take out citizenship), the New York of Psmith, Journalist is strangely unbelievable and even a bit cheesy.  It’s inhabitants seem mostly to speak with weirdly contorted accents and, even allowing for changes in social attitudes and linguistic usage, it comes across as uncomfortable and even borderline offiensive.

Of course, Wodehouse being Wodehouse, it’s not wholly bad – funny in parts and with some moments of authentic Wodehouse genius.  It’s just not one of his best, although it’s still worth reading, even if only as a curiosity.
Posted by Falaise at 2:06 PM