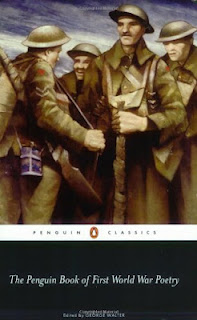 In a world where many, if not most, “classics” can be obtained online or on e-reader for nothing or next to nothing, it may come as some surprise to hear that I would almost always prefer to pay the full price for a Penguin Classics edition.  A big reason for this is the fascinating introductory essays and explanatory notes that they tend to come with.

The Penguin Book of First World War Poetry is no exception to this and, as well as a glossary of military terms and a set of notes explaining the various cultural, historical and literary references in the poems, has an excellent introductory essay by the anthology’s editor, George Walter.

In his essay, Mr Walter summarises the conventional arc of the story of the First World War, which most of the numerous anthologies of war poems follow.  First there is the patriotic, enthusiasm of the summer of 1914, during which legions of young men volunteered to fight, fondly imagining they’d be home for Christmas.  This phase is followed by the emerging horror of trench warfare, a growth in cynicism and bitterness as the war becomes a grinding war of attrition and ends with the mourning of the dead.

Mr Walter puts this down to the crystallisation of the popular image of Wilfred Owen  and, to a lesser extent, Siegfried Sassoon as symbols of the war and to the cultural imperatives of the Sixties and Seventies when many of the anthologies were published.  He disagrees with this construct and points out that, throughout the War and for many years afterwards, the overtly patriotic Rupert Brooke was much more popular and highly regarded than Owen and Sassoon and that many soldiers retained a sense of patriotism and enthusiasm for the War until its very end.

By contrast, Mr Walter groups his selection of poems into themes, which allows him largely to avoid a strictly chronological series of poems.  He also refuses to follow the conventional narrative by collecting poems that show different viewpoints of the theme in question.  He also departs from the usual run of anthologies by acknowledging that war poetry was not only the preserve of combatants but was also created by, in particular, women.  He includes a good selection of these poems, describing the impact of the War on female lives which range from the caustic to the angry to the poignant, such as May Herschel-Clark’s The Mother, an imitation of Rupert Brooke’s The Soldier, which begins, “If you should die, think only this of me” and ends powerfully:

“And think, my son, with eyes grown clear and dry
She lives as though forever in your sight,
Loving the things you loved, with heart aglow
For country, honour, truth, traditions high,
- Proud that you paid their price. (And if some night
Her heart should break – well, lad, you will not know.)

Of course, as I have already implied, there are a host of First World War poetry anthologies out there and the question has to be asked: do we really need another?  Hopefully, I have already demonstrated that this anthology, taking as it does a different approach, is a welcome addition to other anthologies but there is another hurdle that The Penguin Book has to overcome.

As Mr Walter points out, most British schoolchildren are introduced to First World War poetry at school (although he notes with some asperity that, these days, it is more likely to be in a history class than an English class).  As school anthologies tend to contain a relatively consistent selection, this means that there is, if you like, a core of incredibly well-known poems – such as The Soldier, Anthem for Doomed Youth, Dulce et Decorum Est and I Have a Rendez-vous with Death.  This causes the would-be anthology editor a bit of a problem.  If you include all of the standards, you limit the space available for others and end up adding nothing to what has gone before.  If, on the other hand, you go for novelty and include only lesser-known poems, the anthology will feel wilfully obscure and somewhat lacking.

Mr Walter solves this conundrum with aplomb, collating a nice balance of the standard and the lesser known.  He is assisted by the fact that this anthology is substantial in length but I found a lot that was new to me, many of which were either thought-provoking or emotive.

It is interesting that the First World War remains, I believe, unique amongst conflicts in the amount, variety and quality of the poetry it generated.  I have no idea why this should be but am continually drawn to these poems.  I can’t recommend this anthology highly enough to anyone interested either in poetry in general or in the First World War.

Email ThisBlogThis!Share to TwitterShare to FacebookShare to Pinterest
Labels: History, Poetry, War Through the Generations 2012 Challenge

Just checked my poetry library & I have a poetry of war 1939 -45 ed' Ian Hamilton,but not a single ww1 although I have a few Anthologies covering that period. So this would make a good addition. Thanks.

Parrish - thanks for the comment. I've been looking for a good WWII anthology for a while - is the Hamilton one worth buying?