2,498: The Autobiography of Jack the Ripper by James Carnac 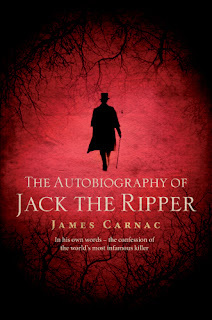 Left to my own devices in a bookshop, I am a bit like a bibliomanic butterfly, flitting from section to section at a whim.  In fact there are so few sections of the average bookshop I shy away from that I can pretty much name them – gardening, mind body and spirit, romance, erotica, horror and, most pertinently, true crime.

I have to confess that I just don’t get the whole true crime thing.  I don’t get the fascination that some crimes and criminals have for the reading public.  It all seems a bit tawdry, a little voyeuristic and slightly creepy.  I can’t help but feel that there’s even a faint tang of hero-worship about some of these books and I’m even suspicious of the self-proclaimed experts who write these books.

So, it won’t come as a surprise that I have virtually no interest in Jack the Ripper, probably the most iconic of British serial killers.  In fact, all I knew about him was that he killed a number of prostitutes in Whitechapel towards the end of the 19th Century and that he was never caught.  Unlike the army of Ripperologists (yes, really), I really don’t care whether he was Walter Sickert (Patricia Cornwell’s chosen perpetrator), the Duke of Clarence or any of the other more or less plausible suspects (including Lewis Carroll, believe it or not).

Consequently, when the lovely people at Transworld kindly sent me a copy of The Autobiography of Jack the Ripper (TAJTR), my heart didn’t exactly leap from excitement.  In fact, I almost didn’t bother with it, which would have been a shame as it is, at the very least, an intriguing read.

If you believe (or are happy to suspend your disbelief) the book itself, TAJTR is a printing of a manuscript found by one Alan Hicken, proprietor of the Montacute TV, Radio and Toy Museum, amongst the papers of S.G. Hulme Beaman, creator of Larry the Lamb.  The manuscript purports to be the autobiography of one James Carnac, who claims to be Jack the Ripper.

The book is divided into three parts: the first recounts Carnac’s life up until the summer of 1888.  The second deals with the period during which the Ripper murders took place and the third recounts the remainder of Carnac’s life, including an explanation of why the Ripper murders suddenly ceased.  There is also an epilogue, inserted into the manuscript by a third party (for reasons that will be apparent if you read the book).  Finally, there is an analysis of the book by one Paul Begg, who has made a number of contributions to the canon of Ripperature (no, I didn’t make this up) and is, apparently, a Ripper expert.

The story itself can be dealt with quite quickly.  It’s a perfectly well-written story which jogs along nicely.  If I’m being perfectly honest, it’s lifted by purporting to be the life story of Jack the Ripper – I suspect if it had been the autobiography of “just another serial killer”, the writing wouldn’t particularly hold the attention.
But that would be to miss the point because this is purporting to be the Ripper’s own story and that’s the whole point of it.  The story itself is almost of secondary importance and, in fact, the psychological explanation for the Ripper it gives (likes blood and knives, kills prostitutes to sate his bloodlust because they are worthless, would welcome the release from life and so he is not harming anyone) is unexceptional.  The intriguing thing about TAJTR is what the book really represents.

For, of course, it could be one of a number of things.  Firstly, it could be the actual autobiography of Jack the Ripper and could be doing just what it says on the tin.  There are a number of objections to this.  I would have thought that if it were truly what it claims to be, there would have been front-page news interest in the book, rather than just trade interest.  Also, Begg seems not to have been able to corroborate the story despite there being so much detail in the manuscript that it should have been possible to do so, even accepting that the author used pseudonyms for the characters.

Moving down a layer, this could actually be the autobiography of a James Carnac, who was laying claim to be Jack the Ripper.  This would be pretty odd, given that the manuscript was apparently only to have been published after his death, thus depriving him of the thrill of the ensuing notoriety.   It also seems to be a pretty pointless exercise if this were the case.

More plausibly, TAJTR could be a work of fiction.  This is my view and it’s supported both by the above thoughts and the fact that it reads like a novel, has the structure of a novel and has a suspiciously neat and fitting conclusion that almost screams “fiction” at the reader.  The question still remains, however, of who the author is – Hulme Beaman or Hicken and Begg (or one of them).  It could be either, I suppose, although as both Hicken and Begg point out, if Hulme Beaman was the author, it would be radically different to anything else he wrote during a lifetime of writing and would also have been totally out of character.  If true, of course, the book would have some niche interest to those fascinated by early radio in the UK.

I can’t be certain, but I do believe that TAJTR is a very clever concoction by Messrs Begg and Hicken, using inconsistencies, uncertainties and some cod analysis and provenance to create a fascinating book that is not just not what it claims to be but is also not what it claims it probably isn’t.  It’s witty, well thought through and put together with an attention to detail that helps it leave just enough uncertainty to make you think – could it really be true?

I’m still not that fussed about the whole Ripper thing but I did enjoy this book – it was one of those books that made me secretly giggle for the cleverness of it all.  I really do hope that Hicken and Begg were responsible for it; if any of the other possibilities are true, it would, perversely, make it a worse book.
Posted by Falaise at 5:29 PM

I've read in another blog that the font of the book is a but distracting (type-writer style). What did you think?

Alex - I thought it was a little gimmicky but it didn't distract me.