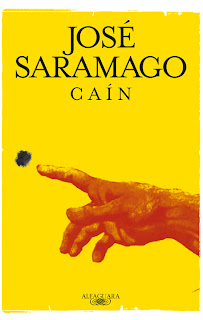 Jose Saramago, Portuguese Nobel laureate, died last year at the ripe old age of 87.  The English translation of his final novel, Cain, has recently been published and I am very grateful to Houghton Mifflin Harcourt for letting me read an ARC.

Prior to this, I’d not read anything by Saramago and didn’t know quite what to expect but I know that I will definitely be looking out for more of his books as I thoroughly enjoyed Cain.  Having said that, I could easily see many overly serious Christians taking a very different view of the book to me.

The story of Cain and Abel is one of the best-known Old Testament stories.  Cain, a farmer, became the first murderer when he killed Abel, his brother, in jealousy that God had accepted Abel’s offerings but not his.  God punished Cain by making him an eternal wanderer in the world and by putting a mark – the mark of Cain – on him.

Saramago turns the story on its head, having Cain blame God for making him a killer and generally portraying God as being a pretty unpleasant and unreasonable character, whilst Cain is a decent kind of guy.  The book plays with the concept of the eternal wanderer, continually uprooting Cain in both place and time and using this to reimagine several well-known Old Testament stories, inserting Cain into the action.

Thus, we have the story of Abraham being prepared to sacrifice Isaac but, this time, the angel sent by God gets held up and it is Cain that stays Abraham’s hand before Cain berates God for his petty and vain actions.  As Saramago the narrator intrudes, “Yes, you read correctly, the lord ordered Abraham to sacrifice his own son, and he did so as naturally as if he were asking for a glass of water to slake his thirst, which means it was a deep-seated habit of his.  The logical, natural and simply human response would have been for Abraham to tell the lord to piss off, but that isn’t what happened.”

We see Cain as the lusty lover of Lilith, at the battle of Jericho, the Tower of Babel and as a passenger on Noah’s Ark, where he takes his final revenge on God by killing off all the other human inhabitants, thus depriving God of his new people.

Everywhere Cain turns, he sees more evidence of God’s violence and lack of reason or consideration for his creations.  Saramago is constantly pointing out the darker side of God’s actions in the Old Testament.  His God is not a kindly Father of Man.  “The lord isn’t listening, he’s deaf, everywhere the poor, unfortunate and wretched cry out to him for help, they plead with him for some remedy that the world denies them and the lord turns his back on them.”

Saramago was, of course, an atheist and this is an anti-religious book but it is also very funny.  There is a rich vein of humour running through the wry narration and some genuinely amusing passages.  Despite his idiosyncratic use of punctuation and his trick of eliding conversations together so as to make the reader have to concentrate more, the pages slipped easily by, telling a aplendid story whilst slipping in many barbed comments on the iniquities and wickednesses permitted or caused by God.

I can't comment on where this fits into Saramago's body of work but it was both entertaining and thought-provoking and highly amusing.
Posted by Falaise at 5:37 PM

Funnily enough, I picked up a copy of this in a charity shop this week! Glad you enjoyed it. Cain's is not a story I really know from the bible, so it will be interesting to read anyway. You should read 'Blindness' which is an absolutely amazing book.

I've read a couple of Saramago's speculative novels and his memoir, but I haven't yet read any of his "religious" novels. I have an e-galley of this one, as well as The Gospel According to Jesus Christ, and I'm excited to read them. I am a Christian, but I am fascinated with others' takes on the Christian faith, and Saramago is so clever that I'm sure I'll get something out the reading. I'm glad to hear that there's humor in the narration--it's something I think Saramago does very well.

Gaskella - Thanks for the recommendation.

Teresa - I hope you enjoy it.

Got this from my dad (big Saramago fan) for Xmas last year, but it's still on the TBR. Can I recommend Blindness or Baltazar and Blimunda? Although most of the international community is besotted with the first, I've rarely seen any reviews of B&B, which is one of most popular in Portugal and my favorite. Earlier this year I read and really liked History of the Siege of Lisbon.

The book is also packed with irreverent humor. For example, Cain disputes with God whether Noah's vessel containing so many animals can float. Another example is, "Among themselves, the angels were happy to acknowledge that life in heaven was the most boring thing ever invented, with the chorus of angels constantly proclaiming to the four winds the lord's greatness, generosity and even his beauty." Saramago also describes the horrendous unsanitary conditions in Noah's ark.
I like this site :: Alaska Real Estate