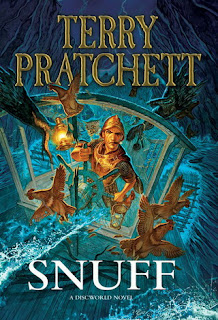 Snuff is the 39th in the Discworld series.  It seems a long time ago now that The Colour of Magic came out, when I was in my early teens, and incredible that he has managed to maintain such a level of productivity, both in quantity and quality, throughout my entire adult life to date.  Snuff is no exception and an excellent addition to Pratchett’s oeuvre.

As Snuff is not released until 11 October, I will do my best to avoid spoilers, or at least major spoilers, but if you prefer to read with no prior knowledge of the book then I would suggest you close this page, run off immediately to pre-order the book and then return here on the 12th or 13th October after devouring the book, in order to see to what extent you disagree with me…………

…………………………If you are still with me, Snuff is the latest Discworld volume to feature Commander Sir Samuel Vines, Duke of Ankh, Commander of the City Watch of Ankh-Morporkh, wife of the redoubtable Sybil Ramkin, father of Young Sam and Blackboard Monitor.  The story opens with Sam getting ready to surrender his badge of office to Lord Vetinari, Patrician of Ankh-Morporkh.  Yes, it’s true.  After years of sterling service to the city, Sam’s time has come. Under pressure from Lady Sybil and with the connivance of Vetinari, Sam is being forced………….to take a short vacation.

However, as this is Sam Vimes we are talking about, it is not long after his arrival at Ramkin Hall that he finds himself investigating the mysterious disappearance of the village blacksmith and the murder of a goblin girl.  From there, of course, things escalate and we are treated to the hot pursuit of an oxen-driven river barge, cross-border police cooperation, the foiling of an international criminal gang and the eternal search for bacon sandwiches.  All in a day’s holiday for our Sam, who is assisted in his endeavours by his faithful manservant, Willikens, a kind of ninja Jeeves, and a raw but surprisingly handy country copper.

Snuff is a thoroughly enjoyable, fast-paced read with everything that one would expect from a Discworld novel.  Pratchett takes on issues of (in)human rights, the class system and social policy and manages to make some interesting points under the cover of a frenetic plot and some beautiful wirting.  Ignore any prejudice you may have about the fantasy genre that Pratchett gleefully subverts and hopefully you will see his wonderfully smooth writing style.

As in other books in the City Watch story arc, Vimes’ ongoing struggle between his darker impulses and his better nature is a central part of this story.  Continually tempted to break the rules and to use violence to bring about justice, Sam clings to his badge of office and his duty to uphold the law.  He is the paradox of a man who believes he is, at root, bad but who consequently acts as a good man to protect himself from his own nature and in doing so shows himself to be a truly decent man.  Vimes’ views on justice and the law have much to commend them and make a far more serious point than one would expect from a comic novel.

If you are already a Pratchett fan, you will need no more convincing from me and will enjoy Snuff.  In particular, there are some brilliant and affectionate riffs on Jane Austen, including Sam’s heavy-handed resolution of the marital woes of a country family with a number of unmarried daughters.

If, however, you are not yet a Discworld devotee, I do strongly urge you to lay aside any pre-conceptions you may have and give the man a go.  This is not just humorous fantasy, this is social satire and commentary.  In his books, Pratchett deals with all sorts of issues: corporate greed, war crimes, the difficulties of multi-culturalism, modes of government, justice and morality.  But don’t just take my word for it, take that of  Booker Prize winner, A.S. Byatt:

“Pratchett too requires us to think. Whenever I read his stories, I find myself thinking that he is “grown up”. He may write benign comedy but he knows how horribly complicated and exciting the Universe is. I like to read Tolkien, but both he and Philip Pullman appeal to the nostalgic lost child in me, who read stories in which good and evil were clearly distinguishable, and love made things better. Pratchett writes farcically, and knows blackly………………….. the truth seems to be that the sheer force of Pratchett’s world-building and word-building energies can accommodate farce and local jokes as it can accommodate parody of Tolkien, Bulgakov, Shakespeare, Lawrence of Arabia or .”

Snuff may feature goblins and other assorted fantasy staples and it might be set in a world that sits on the back of four elephants that, in turn sit on the back of a giant turtle but, deep down, it is thought-provoking satire and I honestly believe that the scoffers are missing out on something.  It’s not the best Pratchett but, equally, it is not one of his few misfires (Moving Pictures is my least favorite).  Once again, a big thank you to Harper Collins for the ARC, which means that I know what a treat you have in store for you next month.  Enjoy……..I certainly did.
Posted by Falaise at 4:15 PM

Follow our signals today and earn up to 270% daily.