Top Ten Tuesday (or Thursday): Ten Books in Search of a Reader 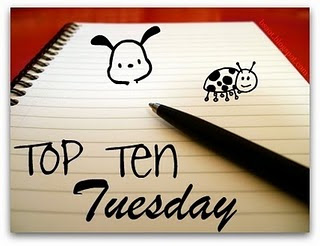 This week’s Top Ten Tuesday theme, cunningly posted by me two days late and brought to us all by the lovely people at the Broke and the Bookish is:
“Top Ten Books I Just HAD to Buy...But Are Still Sitting on My Bookshelf”
So, let’s get this straight.  Out of the unread books on my bookshelves at home and my office desk drawers, you would like me to pick ten? And not just any ten but the top ten?  Okaay.  Let’s be honest here.  It’s not going to happen.  How on earth would I go about doing it?  By length of time on shelf?  By perceived literary merit?  I have no idea.  So I’m afraid that what you are going to get today is a random selection of ten books in my TBR pile that I bought but that have not yet made it off the shelf….or have made it off the shelf only to be put back on it.  To try and fit in with the underlying idea of the theme, I have disqualified books bought very recently and books that were bought unrequested for me.
1.         The Secret Agent by Joseph Conrad.  This one has been sitting in a corner of the basement for nearly half a decade now.  Every few months, I look at it and think, “You know, I really fancy reading that soon.”  Then, I forget about it until the next time it catches my eye.  I really will read it soon, honest.
2.         The Classical World by Robin Lane Fox.  I did start this a long, long time ago.  It’s a narrative history of both ancient and in one BIG volume.  I couldn’t get into it so put it back.  I bought it in hardback and it is a bulky tome which probably hasn’t helped.  It is available on Kindle so I might try it that way to see if that helps.
3.         The Great War for Civilisation by Robert Fisk.  This is another monster. A history of the wars, politics and other events that have shaped the , I bought this during one of my recurring bouts of fascination with the region.  It’s in the drawer because Fisk’s outspoken pro-Palestinian views aggravate me and, frankly, it’s too heavy to carry around.  Annoyingly, it’s the only book by Fisk not available on Kindle and surely the one best suited to being electronically shrunk.
4.         The Story of French by Jean-Benôit Nadeau and Julie Barlow.  I can’t quite remember why I was so keen to read a history of the French language but I can remember needing to buy this book which is, more than two years later, still languishing on the shelves.  Zut alors!
5.         by Anthony Trollope.  I bought this shortly after finishing The Warden but thought I would read something else before it.  Eighteen months on and it is still on the shelf.  I really will read it this year.
6.         Station by David Downing.  The first in a series of historical spy novels set in pre-WWII , this one seems to get queue-jumped every time it comes to the top of the TBR pile by something else that just happens to catch my eye.
7.         A History of Histories: Epics, Chronicles, Romances and Inquiries from Herodotus and Thucydides to the Twentieth Century by John Burrow.  Another in the pile that I do really want to read but which is repeatedly overlooked in favour of another book that shouts louder.
8.         The Prisoner of Vandam Street by Kinky Friedman.  Former lead singer of Kinky Friedman and the Texas Jewboys, Kinky is the author of a number of crime stories featuring a fictionalised version of himself and many of his friends.  They are slightly deranged, very funny and I loved them in my twenties.  I bought this one a while ago but haven’t mustered the enthusiasm to pick it up since.  I think I may have lost the love for the Kinkster.

9.         Unknown Quantity by John Derbyshire.  Yes, it’s true.  I once simply had to buy a history of algebra.  It remains unread.
10.       Endless Feasts edited by Ruth Reichl.  A collection of articles from the archives of the recently-defunct Gourmet magazine, including pieces by the likes of M.F.K. Fisher, Madhur Jaffrey, Claudia Roden, E. Annie Proulx, Paul Theroux, and Elizabeth David, I will one day get round to reading this.
Posted by Falaise at 10:53 AM

I hadn't expected to see many common books across people's lists, given this week's very random Top Ten topic, but I have The Secret Agent on mine, too! =)

A History of Histories sounds really fascinating--but I know what you mean about other books shouting louder than it does. It seems like a restrained, dignified read that knows its own worth so well that it can afford to be patient. =) I hope you get to it soon, though!

Do these books have anything is common? Were they bought more or less at the same time or are they above-average in number of pages?

The Secret Agent is a good story about pathetic people. You may have noticed from yout visit to my blog that this year is my Trollope year. :-)

I didn't even bother posting about this since majority of my books are ones I haven't read. For some reason, I'd rather go to the library and read something I DON'T have...

Alex - I re-read the list hoping to find a common thread but completely failed. I'm afraid they are a pretty random but representative cross-section of the TBR pile.

Ana - I have noticed, although I see you have chosen to go for the political novels rather than the clerical novels which is where I've started. I do find I can only take so much Trollope at a time though.

Jennifer - I like the idea although persumably you end up with a continually growing TBR pile?