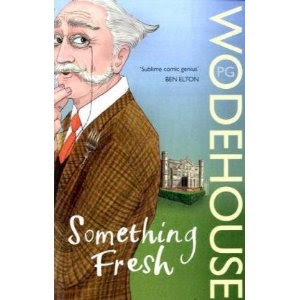 The many references to P.G. Wodehouse and the books in particular have prompted me to start re-reading them in chronological order to see whether I still feel justified in praising them so frequently.
Something Fresh is the first book in the series and was published in the and US in 1915.  Prior to its publication in book form, it had been serialised in the Saturday Evening Post.  The book introduces us to several of the recurring characters in the series including Lord Emsworth himself, his half-witted younger son, the Hon. Freddie Threepwood, Beech the butler and Lord Emsworth’s secretary, the Efficient Baxter.  Most of these are, at least to begin with, typical Wodehousian archetypes – Freddie, the half-wit younger son, Beech, the majestic butler and Emsworth, the muddle-headed old gentleman and Baxter.
The plot too gives us several of the Wodehouse standards. There is a stolen object to recover (in this case the valuable scarab owned by Freddie’s prospective father-in-law) and the settling of various romantic entanglements (in this case, Freddie’s engagement and the partnering-up of his former fiancée with her soul mate, George Emerson and the bringing together of the book’s nominal protagonists, Ashe Marson and Joan Valentine).  As with the character types, these themes crop up so often in his books that one could form the view that they tend to blend into one after a while.
That would, however, be to miss the point.  The glories of Wodehouse derive from his use of language, from the farcical nature of the situations into which he plunges his characters and the sheer lack of malice or pessimism in his writings.  He described his writing in the following terms:
“I believe there are two ways of writing novels. One is mine, making a sort of musical comedy without music and ignoring real life altogether; the other is going right deep down into life and not caring a damn.”
I can’t actually think of a more precise way to describe what it is that Wodehouse actually does.  Reading his best work is like ice skating, gliding over frictionless ice with ease and grace.  There is a smoothness about it that disguises the rich and complex way he structures sentences.
Again, the relatively limited plot variation is almost irrelevant given the sheer verve and inventiveness of the detail of each plot.  The bizarre schemes that his characters come up with to achieve their goals are wickedly funny and rarely repeated.
There are other aspects to Wodehouse’s novels and stories that I will talk about in future posts but which do not really crop up in Something Fresh.  Although, as I have already said, it contains many of the Wodehouse hallmarks, it is somehow a bit flat and a little unsatisfactory.  Prior to Something Fresh, Wodehouse’s fictional output had been limited to his public school stories (which are really juvenilia), the Psmith stories that were born out of the school stories and some of his earlier “one off” novels.  These, like Something Fresh have an anachronistic feel to the language.
One of the things that strikes me most about Wodehouse is the agelessness of his voice.  Once you accept his English upper-class, inter-war milieu, the language of his books is remarkably timeless.  Wodehouse’s first novel was published in 1902 and his last (excluding a couple of posthumous publications) in 1974, shortly before his death.  Over this period of time, English (and, I would guess, American) speech patterns and language use changed quite significantly and yet if you were to pick up almost any of the books he wrote between, say the late 1930s to the end of the 1960s, I think you would, taking his settings into account, have a hard time pinpointing when it was written. His earlier books, however, including Something Fresh, do have a very “period” feel to the writing.  It is not just the archaic slang but the overall feel of the writing.  At this early point in his career, his unique voice has not yet been fully realised and I think that this detracts from the book.
Also, and again by comparison to the bulk of his work, the characters are a little lightweight.  As opposed to the later books in the series, Blandings is merely a location.  The focus is not on Emsworth and the rest of the Blandings household but more on the other characters like Ashe, Joan, Mr Peters and Empson.  None of these recur in other books and there is little character development. I feel it is only technically part of the Blandings saga rather than a real part of it, if that makes any sense.
Overall, Something Fresh, whilst a pleasant enough read is very clearly a rough draft for later Blandings books and is a definite part of Wodehouse’s early period before the true flowering of his talent.
One final curiosity about the book.  The American edition was called Something New and was actually published a few months before the version.  In the version, the two main characters are Americans and there are differences in dialogue to reflect this.  There is also an entire scene that was included in the version but omitted from the version.  I don’t know if that remains true of later editions but it is slightly peculiar.
Posted by Falaise at 2:46 PM

I recently read the American title Something New. I'm curious which scene wasn't included in the UK version....

Bev - According to Wikipedia, "Something New includes a lengthy scene in which Baxter finds a paint-splashed lady's shoe in the library after the theft and attempts to identify its owner: this scene was omitted from Something Fresh."

Loved this post. How strange that the two editions should be so different!

That is a great quote and perfectly applied to his writing.

I've got several audiobooks to listen too and hope the reader is up to challenge. Had great fun with Jonathan Cecil reading "Thank You, Jeeves".

Sharon - I would guess that Wodehouse felt he would make more money by tailoring the book to each of his main markets. He was, after all, dependent on his writing for his income which may explain his prolific output!

Searching for the Ultimate Dating Site? Join and find your perfect match.