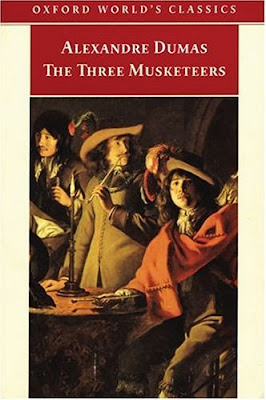 It feels like the Three Musketeers has been a part of my cultural consciousness for almost as long as I have been alive.  Whether it was the animated version that formed one of the segments in the Banana Splits show (re-runs I hasten to add), the Tom and Jerry classic “two mouseketeers” sequence or even the later Dogtanian and the Three Muskehounds, the Dumas classic reaches way beyond the bookshelves to hook in the younger reader.  So, even when I first came to read the book many years ago, I was already familiar with the tropes found in it.  Long before I accompanied D’Artagnan to , it was axiomatic to me that “all for one and one for all” was a motto to live by.
This kind of implicit familiarity with a book I had never read interests me greatly.  There are many books that are so central to our collective Western heritage that most of us have absorbed their basic plots and are aware of the main characters even without having read them.  The Iliad, the Odyssey, Oliver Twist, the Three Musketeers, A Christmas Carol are just some of them – I am sure you can think of others.  This begs the question of what it means to have read a book.

I agree to a large extent-these men are supposed to be admirable but they're so hot-tempered and contrary to what my notions of honor are. I do however feel for Anne and I'm not a big Richelieu fan so I don't really care that she wants him gone.

I agree, the morals are pretty questionable. I see them a bit as caricatures and not real people. I never read it as a child but saw the 1970s movie with Michael York, and I don't really remember much of the moral implications. Maybe the film really downplayed that aspect. I might have to watch it again.

I never saw the 1990s film version but now the idea of Charlie Sheen as Aramis is just laughably ironic.

I do think its funny that I think I really know the story without really having read it before. Funny how that works in some cases.

I completely see where the morals are questionable. I mean, really guys, you're going to mooch off everyone around you and call yourselves respectable? It was a little hard for me to come to terms with the fact that these guys were respected in their communities, but they seem to be a little slimy. And that everyone around them is okay with that! But I'm still finding it enjoyable (if at times a little ridiculous that they fight over EVERY LITTLE THING).

What I really want to do now is watch one of the films to see how they portray these characters. It has been a long time since I've seen a film version, and I think it would be an interesting comparison.

I hope the story picks up for you! Thank you for participating!

This was a very interesting post, a deep look into an old favorite. I'll look forward to your further thoughts in Part 2.

If you would like an alternative to randomly approaching girls and trying to find out the right thing to do...

If you would rather have women chase YOU, instead of spending your nights prowling around in crowded pubs and restaurants...

Then I encourage you to play this eye-opening video to unveil a amazing little secret that can literally get you your very own harem of beautiful women just 24 hours from now:

Start following our signals today and earn up to 270% daily.