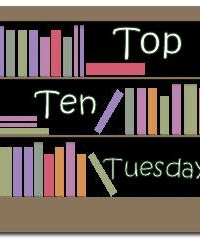 This week’s theme for Top Ten Tuesday, hosted over at the Broke and the Bookish is our top ten book to movie adaptations.  I have to start by admitting that, on the whole I really don’t like film adaptations of books I have enjoyed.  I tend to get very grumpy when the writers and the director allow the film to stray away from being pretty faithful to the original.  At worst this can lead to a temporary lack of popularity with the people I am watching the film with (as exhibit 1 for the prosecution, see my poor behaviour both during and after ).  At best, I simply refuse to watch the film version of a favourite book unless it has already been vouched for by someone whose judgment I trust.
So, in making my top ten list, I have decided to adopt a little personal formula.  Firstly, did I enjoy the book?  If so, did I enjoy the film?  Finally, did the plot variations more than mildly annoy me?  On that basis, the nominees for this year’s award are, in no particular order:
1.         The Lord of the Rings by J.R.R. Tolkien.  This one just about makes the cut as the whole Faramir/Boromir thing almost sent my blood pressure sky high.  On the whole, though, I could see the reason for most of the changes from the book and Peter Jackson did everyone a favour by excising Tom Bombadil entirely.  Fundamentally, having loved the books for years, I was just relieved that the long-awaited movie was fittingly huge in scope and did the books justice.
2.         The Silence of the Lambs by Thomas Harris.  The novel was a superior thriller and the film is an all-time great.  I can still remember the first time I watched this.  Shame about the sequels though.  Altogether now……… I ate his liver with some fava beans and a nice chianti.
3.         The 39 Steps by John Buchan.  This one is nominated largely because I love the book so much, despite (or maybe because of?) it being so anachronistic.  The movie takes some pretty big liberties with the text but I can forgive it because, hey, it’s Hitchcock and it’s a great old film for a Sunday afternoon.
4.         Watership Down by Richard Adams.  One of my favourite children’s books, the tale of Fiver, Hazel and Bigwig is a classic story which conceals important messages about freedom and tyranny under a sad but hopeful story.  The film version has also become a classic, as did the theme tune, Bright Eyes by Art Garfunkel.  Tear-jerking stuff.
5.         Do Androids Dream of Electric Sheep? By Philip K. Dick.  Bladerunner, the film based on this sci-fi novel moved a long way from the plot of the book but this is forgivable as it is a dystopian masterpiece and the main themes remain intact.  Is Deckard a replicant and what is the meaning of the unicorn?
6.         The Godfather by Mario Puzo.  Loved the book, really loved the film.  One of the greatest films ever and the book is surprisingly good.  I’ll give you a bet that everyone in the developed world over the age of 25 can quote at least one line from the movie.
7.         Casino Royale by Ian Fleming.   I am a long time proselytiser for the James Bond novels, which I believe are far better books than they are given credit for.  Goldfinger was once included in a longlist of the 50 best book to film adaptations but, in my view, the film version of Casino Royale is a more faithful replication of the underlying mood and style of the original.
8.         A Christmas Carol by Charles Dickens.  Christmas simply wouldn’t be Christmas without this.  There have been countless movie versions of Dickens’ Christmas Carol but I am nominated the 1951 version, Scrooge (A Christmas Carol in the ), with Alistair Sim giving a legendary performance as Ebeneezer himself.  This version brings back all sorts of childhood memories and deserves a place on my list for this reason alone.  If you would like to read more about the book, I have posted previously about it here.
9.         The Day of the Jackal by Frederick Forsyth.  He may be a thoroughly right-wing old fogey but, during the ‘70s and ‘80s, Frederick Forsyth wrote a string of wonderful thrillers including The Dogs of War, The Odessa File and this story of an assassination attempt on President Charles de Gaulle of .  Both the book and the film have a wonderful mix of fact and fiction and Edward Fox was fantastic as the English assassin.
10.       The Third Man by Graham Greene.  It’s a bit of a cheat, this one as the Greene novella was written as a preliminary treatment for the movie and wasn’t actually published until after the film was released.  Nevertheless, I thoroughly enjoyed the book, the film is a classic and even Greene acknowledged that the changes made in the film made it a better production.  If you would like to read more about the book, I have posted previously about it .here
Putting this list together has been quite illuminating.  I have found that, on the whole, where I have enjoyed the movie, the book on which it is based is not generally speaking a “classic”.  I don’t know whether I am a harsher critic of films of books of this type or whether they are, in fact, harder to do justice to on screen.  I have also come across a number of films that are thought to be good adaptations but where I haven’t actually read the original book.  Maybe if I read some of these, the opinion I express at the beginning of this post may change.  Who knows?
Posted by Falaise at 12:29 PM

I think the classics make better films too. Nice list. Kaye—the road goes ever ever on

I've got The Godfather too! Yours is only the second list I've seen it on.

I definitely share your assumption that you won't like the movie version of a favorite book. I've heard The Godfather is a good book, and I read most of the James Bond books when I was in my teens. I've always thought it funny/curious that Ian Fleming also wrote Chitty Chitty Bang Bang.

booknympho - I've seen it on a couple of others but far fewer than I exepcted. I think the book is a bit underrated.

Jane - Chitty Chitty was certainly a bit of a departure from James Bond!

Dusky Literati - Me too.

What Faramir/Boromir thing didn't you like? I really enjoyed the adaptation in general, but some things always make me grumble every time I see it. In particular, the way Gimli became the comic relief of the movie when he's such a serious character in the book.

I love the Lord of the Rings trilogy, but I haven't read the books. Sometimes I feel like when you really love something and it is so intricate, it is really difficult for the movie to live up to expectations. I feel that way about the Chronicles of Narnia (although I think LOTRs are much better movies in general.

Alex - Faramir's character in the films is very different (at least at the beginning) than it was in the book. There, he is a far more noble character. In the film, he is almost a mini-Boromir, darker and almost succumbing to the Ring. It was a wholly unnecessary change that distorted the book. I agree with you about Gimli though.

LBC - I agree with you. On the whole, I think they did a pretty good job with the LOTR films.

Well, I'm the exception that proves your Godfather theory-at 41, I haven't read the book, or seen the movie...but I get your point about it having saturated our culture.