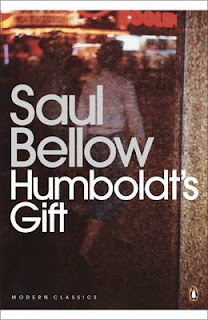 Humboldt’s Gift  is the story of the relationship between Von Humboldt Fleischer, a poet whose early critical success faded before he died a half-mad failure, and his protégé, Charlie Citrine, a more successful but lesser writer whose personal and professional lives disintegrate as the book progresses.  As Charlie’s life reaches a nadir, he comes into possession of a posthumous gift from Von Humboldt, which could possibly change his life forever.
I really thought I was going to enjoy this book.  I’d read lots of things about how it considered the tension between art and commerce, how the title character was based on poet Delmore Schwartz and Citrine, the book’s central figure, was based on Bellow himself, a close friend of Schwartz, and that it was funny and wise and generally great.  I knew that Bellow was a Nobel Prize winner and that Humboldt’s Gift won the Pulitzer Prize.  So I opened it up with great expectations.......
.........which is pretty much where it all started to go wrong for me.  I found this one a real struggle to get through and, ultimately, a bit of a “miss”.  It’s not all bad, to be fair.  There are some very amusing passages, much of the writing is shot through with energy and verve and several of the characters, particularly minor characters such as Thaxter and the lawyers, Szathmar and Pinske are extremely well drawn.  Overall, however, I can’t help feeling that this is a novel where a good story and some interesting themes are struggling to avoid drowning in an ocean of verbiage.
To begin with, there are swathes of the book where Bellow rampages off into lengthy discussions on issues such as love, death, boredom, beauty, laziness and, most turgidly of all, anthroposophy and Rudolf Steiner.  Not only do these mini-essays bludgeon the plot into submission but they are, in themselves, confused, in some cases meaningless, and several of them even read like the kind of drivelling nonsense we sometimes spout, late at night, with friends, after a couple too many whiskeys.  Now this wouldn’t matter too much if they were emanating from the mouth of Von Humboldt Fleischer who, after all, is supposed to be a crazy, half-cut poet-philosopher, whose talent has been chewed up and spat out by a tough, commercially-minded .  This theme, at least, is successfully dealt with by Bellow.
Unfortunately, however, the majority of these perorations are made by Charlie Citrine, Bellow’s alter-ego, and as he is also the narrator of the story, they make the book flag.  Citrine himself is such a wet blanket that I felt absolutely no sympathy for him as both his personal and professional lives disintegrate around him.  He is passive to an alarming degree, pretentious, dull and pretty unappealing.  The blurb on the back of my copy of Humboldt’s Gift describes Bellow as being self-mocking – on the evidence of this book, self-loathing would be nearer the mark.  By the end of the book, Citrine has been abandoned both by his wife and by his girlfriend, Renata and is near bankrupt.  Frankly, it’s not really a surprise.
I also struggled with the whole Cantabile-Citrine sub-plot.  Cantabile is a minor hoodlum who comes into Charlie’s life while trying to collect a gambling debt and ends up attempting to bully him into a friendship.  Cantabile is constantly giving Charlie advice of a self-interested and commercial bent which is diametrically opposed to the moralistic advice Von Humboldt would give Charlie and which Charlie always ignores.  Cantabile is clearly there to contrast crass materialism with the lofty intellectualism of Von Humboldt, with Charlie stuck in the middle as a writer who has managed to become financially successful.  The problem for me is that I find Cantabile, and the situations he and Charlie get into, to be unrealistic and he therefore detracts from the book as a whole.  I suspect that Bellow could have created this contrast better by increasing the role of Julius, Charlie’s property developer brother in .
Finally, the eponymous gift itself is a disappointment.  It turns out to be pretty banal and actually not really very life-changing after all.  I was hoping for something special, maybe something that would change Charlie’s beliefs or his outlook on life, something that would free him from misery and give him a prod into taking more control.  Instead, we get something material and anti-climactic.
I’m glad there are a couple of Bellow’s other books in the 1,001 Books list as I do want to give him another try.  I didn’t enjoy this one and it frustrated me but I hope that Humboldt’s Gift was just a bad fit for me and not representative of how I am going to feel about Bellow in general.
The next on my 1,001 Books list is Gravity’s Rainbow by Thomas Pynchon.  A lot has been written about this one and it is, apparently, a very complex book.  It is also a bit of a chunky one.  So wish me luck.
Posted by Falaise at 2:20 PM

I've often been disappointed with Pulitzer winners. Thanks for the review.
Ann

If you need your ex-girlfriend or ex-boyfriend to come crawling back to you on their knees (even if they're dating somebody else now) you need to watch this video
right away...