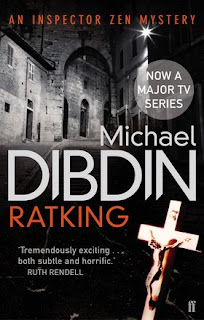 When I was younger, Sunday evening TV was, generally speaking, undemanding and gentle fare, seemingly designed to make us feel happily cozy and cocooned before the impending onslaught of Monday morning and the working week.  Programmes such as Last of the Summer Wine, Heartbeat, Jeeves and Wooster and the regular adaptations of classic novels have been familiar companions as we gird our loins for the week to come. Then, last year, the Beeb did something just a little bit different.  They gave us a big budget, glossy, stylish updating of Sherlock Holmes in three feature length episodes.  It was great.  It was a bit quirky whilst remaining sufficiently faithful to the original idea for me to be able to say that this was Sherlock Holmes and not just a TV detective called Sherlock Holmes, if you catch my drift.

So, when, at the beginning of the year, the BBC introduced its new three episode, feature length, glossy Sunday evening detective show, I was full of anticipation as it featured one of my all-time favourite detectives, Aurelio Zen, created by the late Michael Dibdin.  I had read most of his books when they first came out at the end of the ‘80s and the early ‘90s and was really looking forward to the TV adaptation.

And it was a good piece of TV, no doubt about it.  Rufus Sewell, as Zen, was sharp and stylish and could well have been Italian.  The Italian settings were gorgeous and the cinematography perfect.  The trick of having the lead actors speak in their native English accents didn’t detract and avoided the problem of fake, Italian accents.  Caterina Murino, as Zen’s love interest, gave the casting some authenticity and, all in all, it made for an enjoyable viewing experience.

But there was something nagging away at me. It had been a long time since I had read Dibdin’s novels but I didn’t seem able to relate them properly to the TV programme.  I remembered the novels as being dark, with Zen as a distinctly unglamorous middle-aged man, trapped in the coils of a Byzantine and corrupt .  Sewell’s Zen was, I am assured Grade A eye candy and a far less conflicted individual.  The TV programme seemed far more superficial and light than my memories of the books.  The plots seemed more obvious and, somehow, different.  So, I went back to the bookshelves and re-read the three novels that formed this season of the TV show.

Michael Dibdin wrote eleven Aurelio Zen novels before his early death in 2007.  In crime fiction, Italian detectives have always been popular with British audiences, even before the recent swell in popularity of Euro-detectives such as Wallander, Harry Hole and the like.  The excellent website  Italian Mysteries, for example, lists over 500 English language mysteries set in .  Of all the authors writing such books, however, the undisputed heavyweights are Donna Leon (Inspector Brunetti), Andrea Camilleri (Inspector Montalbano) and Dibdin.  There are many differences between them and it would take another whole post to do them justice but one of the clearest differences is the darker tone of Dibdin’s Zen novels.

Ratking was the first of these (although, unfathomably the third of the TV episodes) and introduces us to Aurelio Zen, a senior police officer, whose career has been sidelined since the Aldo Moro kidnapping (a real life kidnapping and murder of a prominent Italian politician).  Zen is separated from his wife and lives with his mother in .

Zen is unexpectedly assigned to a case in , where a politically connected member of a wealthy family has been kidnapped.  Zen has to wade through the “ratking” of Perugian local politics and a complex and decadent family in order to identify the kidnappers whilst having to deal with pressure from his superiors and trying to avoid the destruction of his career and possibly the loss of his life.

Ratking displays the Dibdin hallmarks.  Zen is, whilst basically honest, a morally ambiguous anti-hero.  The Italy of Dibdin’s novels is one where corruption is endemic and where a system of patronage and favours is run for the benefit of a small elite to whom normal rules and standards of behaviour do not appear to apply.  In this atmosphere of shadow and duplicity, what is not said is often more important than what is and Zen has to apply a considerable amount of ingenuity to work out exactly what is required of him and needs to be prepared to bend with the wind.

Mindful that some people don’t like to find “spoilers” in blog posts (for a discussion of this in relation to far more elevated works, please check this post from the Lifetime Reader and the comments), I shan’t go into detail on the plot but, suffice it to say, I was correct to feel unsure about the TV adaptations.  Much of the detail, including even the identity of the villain and the names of several characters (why, for Heaven’s sake?), had been changed and the subtleties of the underlying politics and corruption had been completely lost.  The characters in the TV show were simpler and the whole thing was much less substantial.  I am glad I had not recently read the book before watching the programme as I would definitely not have enjoyed it as much.  I am equally as glad that the programme made me go back to the novels as they are really very good.  I have since polished off Vendetta and Cabal, the next two in the series.

And if you want to know what a “ratking” is………well you will just have to read the book.  It is pretty gross.

How wonderful: you've written a post which allows the people who don't like spoilers and have seen the adaptation to now read the book with a clear mind!

im definetly adding this to my reading list! thanks for the review! I am enjoying ur blog a lot and I'm a new follower stopping by. I'd love it if u would visit my blog at www.sabaawesome.blogspot.com. thanks!

My Sunday evening programmes when I was a kid: MacGyver and The Nightrider. I also loved the new Sherlock, it was a surprise how true it was to the real thing. Italian detectives – really? I watch lots of BBC and Brit TV in general, but don’t remember a single one!

Lifetime Reader - thanks. Before I read your post, I was planning a post which would have had all manner of spoilers and would have upset a number of people!

Saba - thank you very much for stopping by and commenting. I will visit your blog as soon as I get a chance.

Alex - I didn't really see much MacGuyver or Knightrider but I did like the A Team which was shown at around the same time in the UK. The reference to Italian detectives was to written fiction rather than to TV. If you extend Italian to include Ancient Roman or medieval Italy, then the popularity increases even more.

Trying to find the Best Dating Site? Create an account to find your perfect date.