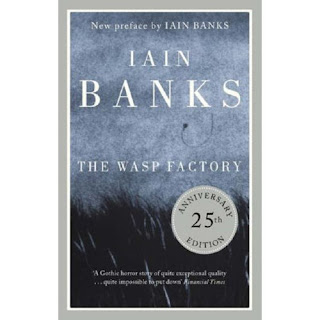 This is, without a doubt, a nasty, twisted little book.  The central character, Frank, is an amoral sociopath whose main pastime involves torturing and killing animals, on top of which he has murdered three times before reaching his teens.  Yet, he isn’t even the most unpleasant person we meet in this book.  Frank’s father is a misanthropic control freak and his brother is a lunatic dog-killer who is confined in a psychiatric hospital.

To be fair, Frank is strange because of an “incident” that has made him a loner, kept apart from the world by his father and scared to venture into town often.  Frank’s brother, Eric, is also scarred by accident.  His insanity was triggered by an horrific incident whilst studying to become a doctor.

At the beginning of the book, none of this is made clear.  Gradually, all is revealed by Frank, acting as narrator.  We find out what Frank did to his three human victims, what he has done to the local wildlife, what happened to Eric, what the Wasp Factory actually is and, eventually, why Frank’s father keeps his study door locked.  The answer to this leads us, at the very end, to the devastating truth about Frank.

The Wasp Factory was Iain Banks’ first novel and is a stunning debut.  It is no surprise that he has gone on to be one of the ’s leading novelists (as well as a first class SF novelist, under the nom de plume of Iain M. Banks – see what he did there?).  Although the language and imagery are gory and full of violence and the characters are unpleasant and unstable, there is a thick thread of humour running through the book, lifting the story and stopping it from being a pure gothic horror.  The way in which he slowly divulges the secrets of the plot is skilful and leads us from feeling revulsion for Frank to liking him.  The ending is shocking and unexpected and has the effect of totally changing our perceptions of the book.

When the Wasp Factory was first published, the reviewers were divided.  Some thought it was the debut of a wonderfully talented writer, while others thought it was just a nasty gore-fest.  In truth (and with the inestimable benefit of hindsight), it is actually both.

The Wasp Factory is not the novel to give your aged Auntie Ethel for Christmas.  Even though I have read other books by Iain Banks (with and without the additional “M”) and know that he is a deeply imaginative writer, I did find myself wondering about the state of his mental health.  If you have a tolerance for gore, violence and madness, however, it is a great contemporary novel.  I had always shied away from it in the past, thinking it would be too grim for me.  I am thoroughly glad that the 1,001 Books made me try it.  Read it, if for nothing else than the twist in its tale – simply fantastic.

When you started your review I thought “No way I’m ever going to read this”, but I can’t resist a good mystery that cleaverly unfolds, especially if it's topped with an ending that sheds new light into everything that happened before.

Have you ever read Chuck Palahniuk? I love his books, so I guess my threshold for gore is high...

I've not read any of his yet but, from what I've read, if you can stomach him, you'll be fine with this and it is very cleverly written.

It's funny, I'd never heard of this book before doing the BBC list yesterday. Now it pops up again. I guess that means I need to read it.

What a coincidence as I hadn't come across the BBC list until I read your post. I'd known about the Wasp Factory for a long time but had always assumed i wouldn't enjoy it.

Did you know you can create short links with Shortest and earn money from every visitor to your shortened urls.