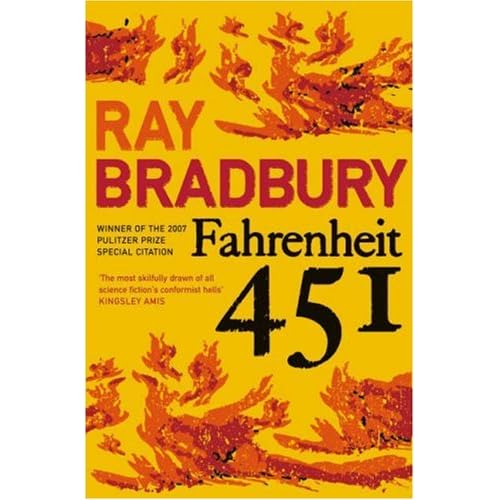 I have been suffering from a certain amount of blog ennui  recently.  My list of books to blog about  is growing inexorably , yet my will to put pen to paper (or finger to keyboard) has about as much strength as Gillian McKeith facing yet another bushtucker trial.  I don’t know whether this is a permanent problem or just a temporary blip – I’m hoping it’s the latter.  It’s probably not been helped by the fact that I have been quite busy, both at work and domestically, which has given my tendency to procrastinate ample scope to operate.

I actually have an alternative theory to explain my malaise.  I’m a little reluctant to give it an airing because it would appear it puts me in a distinct minority in the book world.  I am coming to believe that my “bloggers block” may be caused by the fact that I didn’t enjoy Fahrenheit 451 and am struggling to find anything interesting (or even uninteresting) to say about it.

I know it’s a modern classic.  I know it’s one of the great dystopian works.  I’m more than happy to agree that the central conceit of firemen causing fires by burning books is clever and that it raises important questions about the dumbing down of society and the ability of government to close down sources of dissent if the general population begins to lose its will to object.   And yet..........

I just didn’t enjoy it.  It didn’t hold my attention.  I didn’t find Guy Montag to be a sympathetic character.  The revelation that he has been stealing books for a year is a bit awkward too.  Why would he have been stealing them if he hadn’t wanted to read them?  And if he had, why is such a big issue made of his theft of the single book from the old woman whose house he and his team burn?

In general, although there were some well-drawn scenes, I found the plot to be more of a vehicle for his ideas and images, as opposed to a coherent and developed story.  Many of the characters were one-dimensional and, all in all, it won’t be a book I return to.

I know many people love the book.  I know it has remained in print since its first publication and that it has caused huge controversy as well as being an icon for campaigners against censorship.  I’m sorry.  I wish I’d liked it.  I wish I had been more impressed by it.  I didn’t and I wasn’t.  I’m sure it’s more a reflection on me but Fahrenheit 451 and I just didn’t gel.

Even the title irritated me.  Book paper burns at around 450 degrees Centigrade, not 451 degrees Fahrenheit.

"I found the plot to be more of a vehicle for his ideas and images, as opposed to a coherent and developed story."

Completely agree. It’s the same feeling I had about The Scarlett Letter. The author didn’t start with an idea for a story. He wanted to make a (moral) point and probably brainstormed a bit about what story with better fit his purpose.

Thanks for the comment Alex and it's good to see I'm not alone!

I'm going to sign up for your themes challenge for 2011 but haven't decided on my themes yet.

I loved the book, but I've absolutely felt the way you have about books. Sometimes it's worse if I don't like or dislike the book. It's awful to write a review of something that evoked no feeling at all.

AR - you are absolutely right. If I don't have a reaction to a book, I really struggle to write about it.