2,467: A Study in Scarlet by Arthur Conan Doyle 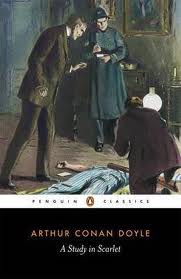 For the benefit of those of you outside the UK, January saw two new adaptations of favourite authors of mine hit the nation’s TV screens, courtesy of the BBC.  One of them, Blandings, based on the P.G. Wodehouse Blandings Castle stories was, I’m afraid to say, simply execrable and only served to reaffirm my belief that Wodehouse is almost impossible to capture authentically on screen, with only Fry and Laurie’s Jeeves and Wooster having come close.

The other, however, an adaptation of G.K. Chesterton’s Father Brown, was actually quite watchable and drove me to dip into the original stories again to see how faithful the TV series had been (answer: not very, but just about enough).  Sitting next to my copy of The Complete Father Brown on my Kindle was my copy of The Complete Sherlock Holmes and, my memory having been jogged, I’ve begun to re-read the Holmes canon, starting at the very beginning with A Study in Scarlet.

The first time I read it, getting on for 30 years ago now, I’d struggled with it, finding it awkward and heavy going and, although it seemed an easier read now (maybe because I read the second half in the middle of the night during a bout of insomnia), I still don’t think it’s the best introduction to the great detective as a novel, save that the actual introduction of Holmes to both Watson and the reader is a classic moment in literature.

I can’t help but see a similarity between A Study in Scarlet and “origin” stories in superhero films and comics or introductory episodes in TV series.  Although I have no idea of whether Conan Doyle intended at the time that Holmes would be a recurring hero, the book’s main purpose seems (at least in retrospect) to establish Holmes and Watson and to create the tropes of Holmes’s persona.  As well as the first glimpses of his extraordinary powers of observation and deduction (including the legendary first meeting of the pair), there is a lengthy internal discussion by Watson of Holmes’s character traits and areas of knowledge.  As a detective novel, however, even allowing for the infancy of the genre and accepting that A Study in Scarlet is more influence on the genre than influenced by it, it is, frankly, not great.

For a start, it singularly fails to comply with the accepted rules of classic detective fiction, especially rule number one of S.S. van Dine’s celebrated exposition of those rules:

“1. The reader must have equal opportunity with the detective for solving the mystery. All clues must be plainly stated and described.”

Not the case here - indeed, the reader is not even introduced to the murderer until Holmes captures him and the religious background that creates the motive for the murders isn't revealed until after the unmasking of the perpetrator.

Now, I don’t actually ever consciously attempt to solve the crimes in the detective novels I read; I much prefer to follow the detective’s journey than to make my own.  So, I can forgive this solecism, especially as A Study in Scarlet was written at the beginnings of the genre.

What I find much more annoying, however, is the sudden switch from Watson’s first person narrative to the all-seeing third person narrative of the second part, a transition that also sees Conan Doyle adopt a slower, more descriptive and, let’s face it, duller style when describing the events in the American West that formed the genesis of the murders in England.
Leaving aside the virulently hostile treatment of the Mormon church, this section weighs the book down and acts as a brake on its momentum.  It’s interesting to note that if this section were removed and the pertinent facts somehow incorporated into the remaining text, we’d be left with something more like an extended short story or a novella than a full-fledged novel which I would cite as support for my view that Conan Doyle and Holmes are usually more comfortable within the structure and length of a short story than they are in the four full-length Holmes novels.

I was, however, glad to be reminded that Watson is nothing like the dull-witted but loyal friend he has often been depicted as in screen adaptations.  Indeed, he is actually portrayed as being an intelligent individual as well as being courageous and decent.  It may be that directors and screenwriters are over-zealous in drawing both Holmes and Watson as distinct characters and creating easy identifiers for viewers, but the truth is that both are more subtle than we tend to give them credit for.

Overall, A Study in Scarlet is notable for the first meeting of detective fiction’s leading partnership and for its standing as an influential early detective story but it is somewhat flawed and, I would contend, far from the best of Holmes and Watson.
Posted by Falaise at 3:10 PM

Fascinating post--I especially like the thought that this first story puts it more in the superhero genre than the detective genre. SH definitely has superhero powers!

I really enjoy reading an author's early works and seeing how he/she evolves over time, and this first story of SH provides ample food for thought.

Now you've put me in the mood to pick up my Sherlock Holmes books. I've longed to read Chesterton, too, so thanks for that reminder.