2,466: The Imperfectionists by Tom Rachman 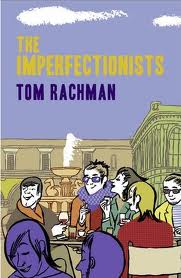 Nominally, The Imperfectionists is a novel set in a failing international newspaper, based in Rome but staffed mainly by expat Americans.  Owned by a wealthy but, in the main, absent or dilettante-ish, family, the paper has been allowed to meander its own sweet way through the second half of the 20th Century, starved of proper investment and singularly failing to adapt to the digital world.

In reality, though, it’s the story of a dysfunctional family, filled with failures, has-beens and eccentrics, held together by the apparently fragile but actually strong bond of the newspaper.  Tom Rachman’s excellent first novel gives us eleven slices of the newspaper’s life, held together by a narrative of the paper’s history.  It’s funny, sad and a vein of acid runs through it.

I enjoyed the way the separate stories, each capable of their own existence, were entwined with each other through the medium of the characters’ relationship to the paper and to each other - although each story has its own lead character, they appear and reappear through the pages, interfering in or observing the lives of others on the staff.

Rachman’s stories extend beyond the world of the paper into the secret lives and dreams of the protagonists.  We see the break-down of marriages, the deaths of careers and the realisation of failure but, underlying all of these, the near addiction of the journalists and editors to their craft, an art that is slowly being killed by the explosion of the internet and the rise of the citizen journalist and blogger.

To give you a flavour of the stories without spoiling the twists in the tale that most of them have, Rachman tells us about the washed up news hack living in Paris, cuckolded by his wife but endlessly chasing that one big scoop that will turn his life around.  We meet the American ingénue, wandering around Cairo like a lost lamb auditioning for a minor job with the paper.  The paper’s business writer is so desperate to keep hold of her boyfriend that she puts up with him stealing from her.  A junior sub-editor is so starved of affection that she ends up stalking a man who kissed her once.

At times, The Imperfectionists reads almost like an elegy for a lost era of journalism.  There’s a gentle melancholy that pervades its pages and colours the lives of its protagonists.  It’s prevented from slipping into a kind of maudlin “had one too many drinks” tone, however, by a pleasing touch of acid in the twists that accompany each story.  I had almost finished it when I suddenly realised why there was an air of familiarity about it.  Have you ever read Roald Dahl’s adult short stories such as Switch Bitch and Tales of the Unexpected?  Each of those has the same kind of acid and the same kind of twist as The Imperfectionists.  I can think of few greater accolades for Rachman than to say that he shows a similar finesse to Dahl in the way he avoids descending into cruelty to his characters for the sake of it - there’s a lovely balance between humour, humanity and sharpness.

I thoroughly enjoyed The Imperfectionists and would recommend it unreservedly.

If you’d like to see what other book bloggers thought of it, try these:  Book Diva's Book Reviews & News, Lara's Book Club, Rhapsody in Books, Leeswammes' Blog, Avid Reader's Musings, Literary Lindsay and The Sleepless Reader.

If you have also posted on The Imperfectionists and would like me to link you here, please let me know.
Posted by Falaise at 3:09 PM

Fabulous and insightful review - I really enjoyed this collection, too.

Did you know that you can shorten your links with AdFly and get money from every visit to your shortened links.