2,495: The Janissary Tree by Jason Goodwin 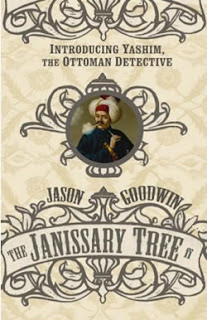 For today’s post, we’re moving northwards around the Eastern Mediterranean and fast-forwarding more than 3,000 years to in the 1830s.  Not only that but our hero has shifted from a family man who develops a drug addiction to Yashim, a eunuch who, although a Muslim, is happy to take the occasional alcoholic drink with his friend, Stanislaw Palewski, Polish ambassador to the Sublime Porte.

The Janissary Tree, Jason Goodwin’s first Ottoman Detective novel, introduces us to a in the early throes of reform, straddling the exoticism of the Ottomans and the modernities of .  Underlying the main plot is a constant theme of the tension between the maintenance of tradition and the acceptance of progress.  Indeed, at the heart of the action is the clash between the remnants of the Janissaries, the former military elite of the Empire, and the New Guard, a Western-style unit that had massacred the Janissaries in the “Auspicious Event” of the 1820s, at the behest of the Sultan.

As the novel opens, four offices of the New Guard have gone missing, shortly before an important review.  When one of them turns up dead in an over-sized soup cauldron, the commander of the New Guard (the Seraskier) calls on Yashim, who appears to be connected with the Sultan and his household in some unspecified way, to investigate. At the same time, the  Validé Sultan, the Sultan’s mother, who is a friend of Yashim, asks him to carry out an investigation into another murder, that of one of the harem girls, who was about to have her first assignation with the Sultan (who would much prefer an uninterrupted night’s sleep).  From here, the parallel investigations uncover the resurgence of an ancient Sufi mystic sect and both revolution and counter-revolution in the febrile streets of , as well as several rococo and very grisly deaths (including a human kebab – yum).

Goodwin had written a couple of non-fiction before this first foray into fiction – one a travelogue of his walking journey through South-Eastern Europe into Istanbul with his wife and the other a history of the Ottoman empire.  He clearly has a vast knowledge of Turkish history and this period in particular, which shows both in the use of historical events as plot triggers and in the authenticity of his descriptions of life in 19th Century .  If you enjoy crime novels with a clear sense of place and time, The Janissary Tree should certainly appeal to you.

Having said that, background knowledge alone will not suffice if the writing style is weak.  That combination tends to lead to lots of flat explication and little atmosphere.  Fortunately, Goodwin can write.  The smells, sounds and sights of fairly leap off the page and, without wishing to get into individual examples, his descriptions of Yashim’s cooking are mouth-watering (even the vegetarian recipes!).

Onto his well-drawn stage, Goodwin drops a number of rounded and sympathetic characters from Yashim himself to the Validé Sultan (based on the real life Sultan’s mother) and including George, Yashim’s Greek vegetable supplier, the Albanian master of the soup makers’ guild and Preen, a cross-dressing köçek dancer.

With this cast, he then weaves an entertaining plot.  I should say now that The Janissary Tree is not a deeply-meaningful psychological thriller or full of the gritty details of real-life detective work.  It is light in tone and clearly meant to entertain rather than shock or enlighten.  There’s something of a cinematic feel to the storyline and Goodwin likes to liven things up with a surprise now and again – an armed man crashing into Yashim’s apartment or a naked Russian countess sitting on a bed.

Yashim is an engaging central character and I have to admit that he has rapidly become one of my current favourites.  After reading The Janissary Tree, I devoured the remaining books in the series (a further three at the date hereof).

My only issue: Yashim is a eunuch, permitted to enter the harem because of his lack of sexual threat.  So how did he manage to “satisfy” the afore-mentioned naked Russian countess?  Any eunuch experts out there able to enlighten me?
Posted by Falaise at 3:54 PM

I've read Lords of the Horizon, his history of the Ottomans and his writing in that was beautiful, so I'm not surprised that this was a good read. Added to my wishlist :)

I am not an eunuch myself but google says it is possible.

Professional trading signals sent to your mobile phone every day.

Start following our signals NOW and gain up to 270% daily.