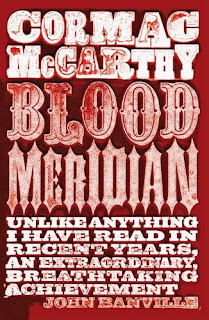 This is going to be an interesting post for me to write (and, I hope, not too uninteresting for you to read) as I had two very strong and differing reactions to Cormac McCarthy’s Blood Meridian.  On the one hand, I think it is an incredibly powerful and well-written book, yet, on the other hand, I really didn’t enjoy it at all and, were it not for the fact that I downloaded it onto my Kindle, I would have hurled it into the waste bin once I’d finished it.

To be fair to myself, the two attitudes are not mutually inconsistent but, nevertheless, I find it a little uncomfortable trying to praise a book for its quality whilst simultaneously wishing I’d never bothered picking it up.  For, despite being an Evil Lawyer and being trained both to see things in a myriad of shades of grey and to be able to claim that black is white with a straight face, I am, at heart, a simple man who likes to gush about the great books I have read and to inveigle against the dross.  Not so here, unfortunately.

Blood Meridian is, without a shadow of a doubt, one of the most textured, well-written, intelligent and vivid novels I have ever read (I initially typed the word “written” here – a Freudian error if ever there was one, as I could not write anything like this if I lived for a millennium).

The book follows the story of an unnamed teenager from Tennessee, known only as “the kid” from his days as a runaway and during his lone journey through Texas and his time as a member of a scalp-hunting gang and his later wanderings through the American West of the late 1800s, ending ambiguously in his possible murder.

McCarthy’s command of the English language is nothing short of extraordinary (maybe even a little freakish).  It is highly unusual for me ever to need to resort to a dictionary whilst reading a novel but here word after word was so alien to me that I had either to look it up or lose the meaning of the passage I was reading.  This facility with language is complemented by his skill in painting word-pictures of landscape, weather and atmosphere so that the borderlands in which much of the action takes place comes alive in all its bleak majesty and empty beauty.  I felt the changes in weather from arid heat to sudden rainbursts and the unforgiving nature of the land and its native inhabitants.

There is also a wealth of themes that are woven together in a way that defies a common interpretation.  Critics have argued over whether it is amoral and nihilistic or a morality tale.  It’s been described as “the ultimate Western” and as a satire on Westerns.  There is a heavy odour of mysticism in it and, apparently, it can be seen as a Gnostic text – I say “apparently” as I am largely illiterate from a theological perspective and have no idea what Gnosticism is.  It’s a book that clearly has a meaning but whose meaning is elusive.  Indeed, even the supposed central character of the kid is elusive, remaining anonymous throughout and slipping in and out of focus as McCarthy’s lens shifts onto other characters such as Glanton and the most memorable and evil of them all, Judge Holden.

Held in awe by Glanton’s gang of scalphunters, Holden is an embodiment of almost divine evil.  He is a murderer, a paedophile and a sadist but he is also something of a dark shaman, seemingly unkillable.  Yet despite his evil, the kid, given numerous opportunities to shoot him, does not do so, lending support to the notion McCarthy plants that he is somehow not strictly human.  McCarthy’s almost biblical writing style also helps to create this impression.

Blood Meridian is infused with a sense of foreboding and oppression, underpinned by its central focus, the never-ending, meaningless, almost quotidian violence generated by and against virtually all of the characters.  Maybe one of McCarthy’s messages is about the futility of violence as he creates such a welter of it that, despite describing it in vivid and explicit terms, it ceases to have an emotional impact as the novel progresses, up until the ending (which I won’t spoil for you).

And this is where my admiration stops and my personal dislike starts.  I found Blood Meridian to be so unremittingly bleak and amoral that I couldn’t identify a single element of hope or enlightenment in it.  It is something of an emotional pile-driver, an exposition of purposeless and meaningless violence, where the weak are broken and the good exploited.  It depressed me to the point where it took me months to read, as I had to put it aside periodically before it overwhelmed me.

I suppose it is a symptom of the book’s power that it could affect me like that and it may also be a sign that I am not as sophisticated a reader as I’d like to think I am but, whilst I can marvel at its quality and could contemplate its meaning for an age, I equally dislike it with a passion.  I can’t disagree with Harold Bloom’s judgement of it as one of the 20th Century’s finest novels but it will never appear on any list of my favourite novels.  Perhaps that is why I am no literary critic.
Posted by Falaise at 5:47 PM

You've immediately made me want to read it!

This is one of the best reviews of the book I've ever read. Like you, I have complicated feelings towards Cormac McCarthy, this book in particular. He is, without a doubt, the finest craftsman of a writer in America today and I wish he would be recognized on an international scale with a Nobel prize. Alas, since he doesn't have much truck with social justice, that's not likely to happen.

But that brutality, that lack of hope, that bleakness--I have such trouble dealing with those things in combination. And while he will always rank on lists of the *best* books I've ever read, it's rare that I include his works on lists of my *favorite* books.

I've also heard about this dichotomy, but related to his other books, especially The Road. Is he * always* like this? Is this his vision of the world?

Maybe I should read a few of his interviews to better understand him, I'm sure some journalist has asked him about these things.

Annabel - I hope you enjoy it more than me!

As the Crowe Flies - Thank you for the compliment and I couldn't agree more with your thoughts on McCarthy.

Alex - I believe this is his usual mind set - it's a bit bleak, even for a "glass half empty" person like me.