2,554: V for Vendetta by Alan Moore and David Lloyd 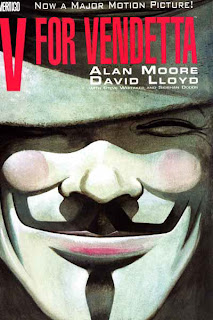 I thoroughly enjoyed this review and am so glad to have read it. Believe it or not, I just watched V for Vendetta last night (for about the 10th time) because I too was thinking of the London riots. I have long said that the movie is the most literary script I have ever encountered, chalk full of Shakespeare quotes and beautiful prose in his speeches. I get chills every time I hear him say, "While the truncheon may be used in lieu of conversation,words will always retain their power. Words offer the means to meaning, and for those who will listen, the enunciation of truth. And the truth is, there is something terribly wrong with this country, isn't there?"

After I introduced one of my friends to the movie, he quickly read the graphic novel and told me that it was fantastic. I am sorry to say I have not yet read it, but your post inspires me further to make that happen. I'm curious to hear how you feel about the movie. When I lived in England briefly, I discovered that my English friends were quite opposed to it for its historical inaccuracy and "Americanization" of a story set in England. Although I can recognize this, I cannot shake my love for the language and the message behind it. As you explained so eloquently, there is a running tension about whether V is a hero or a villain. Regardless, we are filled with the profound sense that we must take responsibility for our lives and discard complacency. I just love the way you discussed all this and hope to check out the graphic novel soon.

Amy - thank you so much for the kind comment. It is interesting you mention Shakespeare as, in the graphic novel, V often speaks in iambic pentameters, one of Shakespeare's favourite rythms. I wouldn't say I disliked the movie but I did find it rather flat and shallow compared to the novel and I can understand the criticisms your English friends make.

I think the riots brought up the authoritarian in all of us. I kept thinking: send in Gene Hunt! I'm glad your family and Falaise Towers (lol!) are unharmed.

I've read more than one person connect V for Vendetta and the events in London. Someone should make a list of "Top 10 Book to Read During Riots".

Thanks, Alex. I should have used your idea for the Top Ten Tuesday meme!