Although I loved many of Enid Blyton’s books, I think this series was probably my favourite.  In some

respects it followed a classic Blyton concept - four children with an animal companion (in this case Kiki the parrot) off having adventures and solving mysteries without much assistance from adults.  In other ways, however, I think it was much more interesting than her other adventure books.  Firstly, the children were, generally, more well-defined with their own talents and clear personalities.  Secondly, there was even less adult involvement than in, say the Famous Five - for instance, in The Circus of Adventure (my personal favourite) two of the children are, essentially kidnapped at the beginning of the story and taken abroad where the other two follow them with no adult assistance.  But, most interestingly, was the gradual construction over the series of a traditional nuclear family as, firstly, the mother of two of the children adopts the other two children (who were orphans) before, later in the series, she marries the main male protagonist, Bill Cunningham, completing the family.  It kind of chimes with Blyton’s anachronistic social mores and, maybe, wouldn’t work today.

Written in 1929, Emil and the Detectives concerns a small boy who is sent to Berlin by his mother with some money for his grandmother.  The money is stolen from him on the train so he puts together a gang of Berlin children to be his detectives and hunt down the thief.  It’s a relatively simple tale but one I rather enjoyed.

Ever since I can remember, I’ve loved mythology and, especially Greek and Roman mythology.  My parents bought me versions of the Odyssey and the Iliad for children and I suspect this love pushed me towards studying classics at school and, eventually, taking both Latin and Greek A-levels.  One of my favourite books about mythology was Roger Lancelyn Green’s collection of Greek myths for children.  All the old favourites are there and, as it’s definitely still in print, I’d heartily recommend it.  Mini-Falaise is blissfully unaware but, one day, her old man will be sitting down with her to read this.

See above but this time in Rome.  I never read his books on Arthurian, Egyptian and Norse mythology but wish I had - I may have come to those mythoi sooner.  Incidentally, I didn’t realise that Lancelyn Green was a former pupil and, later, friend of C.S. Lewis, another resident of this list.

I can’t help thinking of this as a book of wordplay and language teaching as much as a story.  It’s a fun story of a boy, Milo, who drives his toy car through a magic tollbooth to the Kingdom of Wisdom where he visits places such as Dictionopolis and the Island of Conclusions and goes on a quest to rescue Princesses Rhyme and Reason.  If you haven’t read it, it’s really very good with lots of puns and suchlike.  When I was a teenager at boarding school, my parents occasionally used to take me to a restaurant called Le Talbooth for lunch which always triggered memories of this book and tickled me somewhat.

With due apologies to fans of J.K. Rowling, before Hogwarts there was Roke and before Harry there was 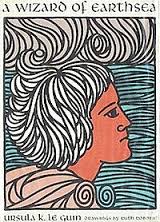 Ged.  A Wizard of Earthsea is Harry Potter with added oomph.  It is the story of Ged, the true name of a goatherd who, having shown great but raw magical power is sent by his first master, Ogion to the school for wizards on the island of Roke.  Although still nominally a children’s book, it is filled with more sophisticated images and ideas and is much scarier and adult in tone than Rowlings series.  As a standalone novel, it is fabulous and also forms part of the Earthsea cycle of five books.  It’s meaty and substantial fare and I still have a copy on my shelves.

I loved the idea of a group of rats with human intelligence helping Mrs Frisby move her poorly little son to her summer house and away from the farmer’s plough.  It’s a lovely book.

Need I go on?  The tales of Mole, Ratty, Badger and Toad are all-time classics.  Loved them then, still love them now.

The classic tale of pirates.  Long John Silver, Israel Hands, Billy Bones and Jim Hawkins.  As well as being an exciting adventure full of action and skullduggery, it also introduced some of the now-standard pirate tropes - the treasure map where X marks the spot, the treasure island and fifteen men on a dead man’s chest.  Brilliant stuff. 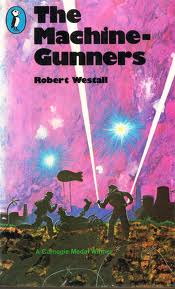 I have to confess I had to do a bit of searching to find the title of this book and the name of the author as only the basic plot had stuck in my head.  In my defence though, it is over thirty years since I read it.  This story, set during World War II, revolves around a group of kids who find a crashed German bomber with a machine gun in full working order.  The kids turn it into a fortress to defend their town.  It’s tense and exciting and is another book where the children take on the adult world independently.

Mrs Frisby and the Rats of NIMH and The Phantom Tollbooth are two of my absolte favorites!

Roger Lancelyn Green - I adored those books, and the knowledge I gained from them stood me in good stead when I started Latin, and did Roman history at school. Still brilliant, sadly I've lost my childhood copies (I coloured in all the illustrations).

Melissa - I don't know about Mrs Frisby but I get the impression that The Phanton Tolbooth is better known in the US than over here. It's funny how association works but I had starter of pigeon in puff pastry at the Talbooth restaurant and now, 30 years later, I still get the taste in my mouth (in a good way)when I think of the Phantom Tolbooth.

Annabel - I could have written the exact same comment (save that I didn't colour in the illustrations - I was a bit prissy about that).

Start following our signals today and make up to 270% a day.

If you need your ex-girlfriend or ex-boyfriend to come crawling back to you on their knees (even if they're dating somebody else now) you gotta watch this video
right away...