2,464: The Revenge of Moriarty by John Gardner 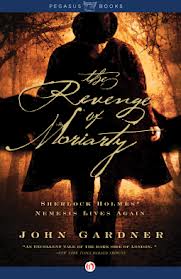 If I were a betting man (which I’m not, largely because I’m too much of a coward to risk lots of money on something I have no control of), I’d wager a reasonably large sum of money that John Gardner (the British spy novelist, not the American literary novelist and critic) will not have appeared on many of the endless “top ten” lists that appear across the literary corner of the blogosphere.  I’d probably go further and surmise that relatively few book bloggers have ever heard of John Gardner and that of those who are aware of him, most would know him only for his contributions to the James Bond canon as successor to Ian Fleming, Bond’s creator and yet the former marine, Anglican priest and alcoholic had built up a backlist of over fifty books by the time he died of heart failure in 2007.

As well as his contributions to the James Bond series, which were, to be fair, variable in quality, he created two characters of lasting appeal - the cowardly Boysie Oakes, who is mistakenly recruited into British intelligence as an assassin, and Herbie Kruger, a kind of quasi-George Smiley, whose shabby exterior conceals his true ability.

Of his other works, I’ve enjoyed the “Secret” trilogy, which is essentially a mash-up of a family saga and a fictional history of MI-6 up until the ‘70s, in that it traces its history through the fortunes of the Railton family, a British spy dynasty.  The Director, a one off novel about the staging of a production of Othello is also well worth a read.

I’m not going to make any overblown claims about Gardner’s literary merits or where he may or may not stand in the ranks of spy and thriller writers.  I think the most telling comment on him that I’ve read is a quote from a Toronto Globe and Mail crime critic, Derrick Murdoch:

"John Gardner is technically a highly competent thriller novelist who never seems to be quite at ease unless he is writing in the same vein as another writer. (He has worked John le Carré and Graham Greene this way, and it's what makes him so well qualified to continue the James Bond saga.)"

Ultimately, I believe that Gardner was a good, but not great, thriller writer, who managed to create two minor classic characters but whose best work is almost pastiche (or, in the case of Boysie Oakes, parody) or, “continuation” if you like.  All of which leads me nicely to the real subject of this post.

The Revenge of Moriarty is the second of three novels by Gardner set in the fictional world of Sherlock Holmes.  As you might by now be expecting, Gardner does an excellent job of capturing the feel of Conan Doyle without being a straight copy and creates an authentically Holmesian Victorian atmosphere but the real trick, and the thing that makes the novel so appealing is that it is written from Moriarty’s perspective and not from that of Holmes.  Indeed, Holmes himself makes relatively few appearances.

The plot centres on Moriarty’s scheme to subjugate the four leading continental European criminal masterminds to his plan to create a pan-European criminal network and, in the process to avenge himself on Holmes, his nemesis, and on Inspector Angus McCready Crow of the Yard.

Although at times, there’s a slight implausibility about the resolution to certain of the sub-plots and episodes, it’s a highly enjoyable read and Gardner maintains a decent level of tension and the altered point of view to that of Moriarty stops it from being just another Holmes continuation story.  He also pulls off the neat trick of making the reader almost want Moriarty to succeed, despite being an appallingly evil man, whilst still making Holmes’ ultimate triumph the desired outcome

As I mentioned above, The Revenge of Moriarty is the second in a trilogy and has recently been re-released.  Gardner himself in his preface states that, although the book is the second in the series, it can be read as a standalone novel.  This is absolutely true as I haven’t yet read The Return of Moriarty, the first in the series.  Nevertheless, I did find myself wishing that I had read them in order and there are inevitably some spoilers for those who haven’t.

I was sent this by the publisher, Pegasus Books, via Netgalley and I am very grateful to them for allowing me to read it.  It is a fun addition to the Holmes canon and, unless you are a Conan Doyle purist of the most extreme kind, you will enjoy The Revenge of Moriarty if you like Sherlock Holmes.

On a more general note, I do believe that Gardner’s non-James Bond novels deserve a bit of a revival.  They are, perhaps, slightly dated but the ones I have read have been enjoyable, undemanding reads and well worth a couple of hours of one’s time, especially if you enjoy a spy novel.
Posted by Falaise at 12:26 PM

Never realised there were two John Gardners - but it explains a lot! I read several of his Bond novels when they first came out, and since I've read a couple of the US Gardner (Grendel is wonderful by the way). Although I enjoy Holmesian stuff, not sure if I need to read these even though they seem like they're fun.

I only really notice it when I saw another blog post about this book and it mentioned it as being by the author of Grendel and thinking that that couldn't be correct!

I read The Return of Moriarty some time ago (well before blogging and detailed reviews of books) and enjoyed it--but somehow never made it any further in the trilogy. Now that you've brought them to my attention again, I may have to correct that.

It has been said that any bettor needs to see this,

Watch this or stop placing bets on sports...

Follow our signals right now and profit up to 270% per day.