A Tale of Two Armstrongs

The newspapers this weekend have been full of stories about two men who, though not related, share a surname.  I am, of course, referring to the two Armstrongs,  Lance and Neil.  Until recently, both men have represented something noble and uplifting about the human condition and both could, if they were so inclined, lay reasonable claim to the status of icon.  But the news of the past few days of Neil’s death and Lance’s disgrace has confirmed one as a hero for all time and the other as a hypocrite, liar and cheat. 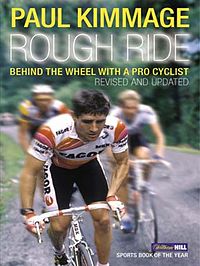 Professional road cycling is an incredibly tough sport where races like the Tour de France routinely break strong and highly trained athletes, both physically and mentally.  In extreme cases, such as that of Tommy Simpson, the sport can, quite literally, kill.  If you are in any doubt about this, just have a read of books like Paul Kimmage’s Rough Ride, an autobiography of a journeyman professional, whose role in life was to do whatever was necessary to assist the stars of his team.

In this light, Lance Armstrong’s achievements appeared to be superhuman.  After all, this was a man who not only won more Tours de France than any other man, who had rewritten the record books of his sport and had totally eclipsed greats of the sport like Eddie Merckx, Bernard Hinault and Miguel Indurain but he had done all this after having recovered from life threatening cancer and having undergone severe chemotherapy.  This was life-affirming stuff, a lesson in the ability of humankind to suffer and to overcome huge adversity.  Armstrong’s Livestrong Foundation quite rightly managed to raise hundreds of millions of dollars to become the second largest funder of cancer research in the US after the federal government.

But even after all of this, he was probably only the second most famous bearer of his surname.  Neil Armstrong is, of course, famous for being the first man to set foot on the Moon but he was also a highly skilled pilot who flew almost 80 combat missions in the Korean War before becoming a test pilot and, ultimately an astronaut.  Undoubtedly a possessor of Tom Wolfe’s Right Stuff, the grainy TV pictures of his one small step and that hair-tingling commentary are amongst the most iconic images of all time. 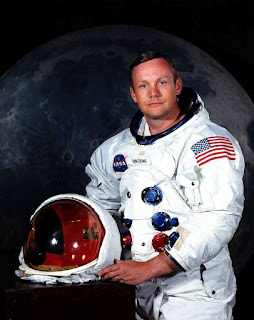 A very private individual, Neil Armstrong became a professor at a university in Cincinnati after his moon landing and later retired to a farm in Ohio.  His public appearances were infrequent and he did not court the attention that could have followed him everywhere.  He was about as far removed from today’s celebrities as is imaginable.

In 1999, on the 30th anniversary of the moon landing, Armstrong gave his view on what his achievement (and those of his fellow astronauts and the support teams at NASA) meant to the world.  He believed that it was significant because it signaled that humankind was not forever bound to the earth but could free its shackles and move beyond it.  This view, whilst accurate, was also, as was typical of the man, too understated.  His real achievement was to remind us all of our potential to challenge our limits and to do the seemingly impossible.  In breaking new frontiers, Armstrong revealed to us the best of our natures.

For Lance, it all started to go wrong in the late 2000s when allegations of performance enhancing drug use first began to circulate.  Notoriously litigious, Armstrong was always happy to sue and fiercely denied any wrongdoing, often attacking the character of those who challenged him.  He also benefited from the unwavering support of team mates and management and from his power and influence within the sport.   But, at the beginning of this year, four of his former team mates unilaterally emailed the USOC to ask not to be selected for the US cycling team at the London Olympics.  The reason soon became clear.

In pursuing a federal investigation into doping in cycling, the FDA had forced a number of cyclists, including members of Armstrong’s former team, US Postal, to give evidence.  Although the agency had dropped its investigation, the US Anti-Doping Agency had become aware of the testimony of the cyclists and started its own investigation.   Knowing that USADA was already aware of their previous testimony, Armstrong’s team mates couldn’t go back on their evidence.  USADA determined that Armstrong had been guilty of systematic doping and stripped him of each of his Tour de France titles.  Although the worldwide governing body of cycling, the UCI, could challenge this decision, it appears unlikely to do so.

With evidence and testimony continuing to build up against him, Armstrong last week decided not to contest the USADA charges and to accept the stripping of his titles.  Let’s be clear here.  A man like Armstrong does not quit fighting just like that.  Despite trying to portray himself as a victim, his decision can only be seen as a tacit admission of guilt.  Armstrong is not the comic book hero his PR portrayed him as, defeating cancer and the cycling competition.  He is a cheat and a liar.  He is also a hypocrite, having been outspoken in his condemnation of doping.

If I’m honest, if all Armstrong had been guilty of was doping, I wouldn’t have been so angry.  The sport of road cycling was rife with doping during the ‘90s and 2000s.  Indeed, it is probably true to say that it would have been exceedingly difficult to beat a doped up field without resorting to it oneself.  Since Armstrong’s retirement, two of his successors to the yellow jersey of the Tour champion, Floyd Landis and Alberto Contador have also been banned for doping.  Landis has spoken eloquently of the environment of the sport and the US Postal team, in which it felt normal and not immoral to dope.  I can empathise with this and with the pressure a young athlete must have felt.

What makes me angry are the lies, the hypocrisy and the smearing of those who bore witness against him, such as Michelle O’Reilly, the US Postal team therapist, whom Armstrong called a mentally disturbed prostitute in court, abusing the privilege granted to court evidence.  And most of all, the damage he has done to the belief that we, the human being, can really do such amazing things by challenging our limitations.

Which brings me back to the other Armstrong, Neil.  It was announced yesterday that he had died, aged 82, after having suffered heart problems.  Unlike Lance, he never wrote an autobiography.  Unlike Lance, he will forever be, not just an American hero but a hero for humankind, a man who opened our minds to humankind’s potential to open new frontiers and challenge its limitations.  Even more wonderfully, by never claiming to be superhuman or special, he showed us that this potential lies within us all.  The words of John Magee’s poem, High Flight come to mind:

“Oh! I have slipped the surly bonds of Earth
And danced the skies on laughter-silvered wings;
………..
And, while with silent, lifting mind I’ve trod
The high untrespassed sanctity of space,
Put out my hand, and touched the face of God.”

Great comparisons and good post on the background of Lance's "situation". I have never understood the whole doping thing after he had cleared all the tests. Thanks for clarifying.
Ann

Great post, Falaise! I read a good biography of Neil Armstrong a few years back - I think it was called "First Man" authored by James R. Hansen. I was so sad when I heard of his passing.
-jay

Thanks, Ann. With the recent rash of books out on it, I think there's a lot more to come!

Jay - My mother repeatedly tells me that she got me out of my cot (I was only a few weeks old) so that I could witness the Moon landing so I've always felt a connection to him. I too was very sad to hear of his death.

I "watched" it in a motel room in New Mexico (or so MY mom tells me...) The family was in the midst of a summer camping trip but found a motel with tv so history could be witnessed. I was too young to have any distinct memory of this.

I've just installed iStripper, and now I can watch the hottest virtual strippers on my taskbar.