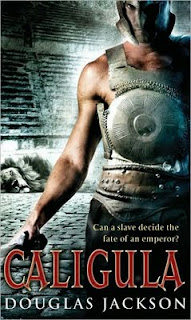 Caligula is the third book kindly sent to me by Transworld Book Group as part of the Transworld Book Challenge, for which I thank them.  It tells the story of Rufus, a young slave from , who is sold to a purveyor of wild animals to Roman circuses.  Finding that he has a way with animals, Rufus becomes an animal trainer, even appearing in the circus once himself.  Along the way he befriends a gladiator, Cupido, himself a slave, having been the son of a defeated German prince.
Life is looking good for Rufus when he is unexpectedly sold to the Emperor, Caligula, to look after the Emperor’s new elephant.  Now living inside Caligula’s palace, Rufus plays witness to the paranoia and depravity that surround the Emperor and, inevitably, becomes involved in the continual plotting against Caligula by members of his household, family and guards.
Of the Julio-Claudian emperors of , Caligula ranks alongside Nero as the most luridly lunatic of them all.  From wanting to make his horse a senator to sleeping with his sister, an author wanting to set a novel during his reign certainly has no shortage of material to work with.  This, of course, is a slightly double-edged sword as Caligula’s well-known life story also acts as a constraint upon the author’s freedom of imagination.
Douglas Jackson starts off by handling the material well, choosing to use Caligula almost as background, only having him appear directly in a small number of scenes.  Rufus, and his relationships with Cupido and other key characters takes centre stage and it is only as the plot moves towards its climax that other real historical figures, such as Caligula’s uncle, Claudius, and Chaerea, one of the leaders of Caligula’s Praetorian Guard, become key characters.
The plot moves along briskly and there is no shortage of pace.  There’s plenty of casual period detail to make the book feel solidly placed in ancient and the dialogue doesn’t feel too modern for the setting.  All in all, it’s a quick and easy read and something one could pick up at the airport to help while away a long flight.
Unfortunately, that’s about where it ends.  Plot-driven in the extreme, there is very little depth of characterisation and most of the main characters are quite flat.  This, combined with large dollops of blood and guts (which, to be fair, is probably unavoidable in a novel set in this period) and a spoonful of sex, made me think that its real audience is teenage boys who are not really into literature but are happy with something that gets the adrenaline and hormones going.  Basically, not me.
If that were all, I’d be happy to chalk it down to experience and accept that it just wasn’t my kind of thing if it weren’t for one big, fat, glaring problem.  I’ve mentioned above that Caligula’s life story acts as constraint as well as source and this links in to one of my beliefs about historical fiction.
It seems to me that, if you are going to write historical fiction, you can take certain liberties with the history.  You can give your protagonist a fictional title.  You can add in minor events that didn’t really happen.  You can even insert your character into major events where it does not compromise the integrity of the event (i.e. having your character as, say, one of the executioners of the Romanovs as the guards are not well-known figures).  But, I believe that it destroys the integrity of a historical fiction work if major historical events are changed significantly.  That’s not to say that books where that happens can’t work; just that they are not historical fiction.  They can be counter-factual history.  They can be speculative fiction (for example, the excellent Fatherland by Robert Harris).  They cannot, though, be billed as historical fiction.
And this is where Caligula really fails for me.  I don’t want to reveal a big spoiler here but, suffice it to say, one of the key scenes, dealing with one of the most important events in Caligula’s life, is historically completely inaccurate.  Not only did this really spoil the book but it is also potentially misleading to anyone who reads the book and is not already familiar with the history.
So, I’m sorry, but Caligula just didn’t work for me.
Posted by Falaise at 1:41 PM

Hi Richard, sorry you didn't enjoy the book, but thanks for reading it and giving your opinion, which I don't necessarily agree with, but fully respect. You're never going to get everything right with a debut novel and I certainly wouldn't argue that it's not high-minded literature, because that's not what I set out to do.
The reason I'm getting in touch is the last few paragraphs. I'm intrigued because by and large I tried very hard to stick to accepted history about Caligula. I may have taken my own road on why something happened, but generally not if. In which case I'd really like to know if I have got something so badly wrong that it spoiled your enjoyment of the book, because it will spur me to make sure I don't repeat the same mistake in future. Can you please get in touch with me at dug.jakson@aol.co.uk and let me know what the offending event/scene is and why it's inaccurate. I'd honestly be very grateful.

Best wishes, and don't give up on me just yet, why not give Hero of Rome a try?

I agree with you, if I read historical fiction I want to read about real events through the eyes of a fictional character. Sorry you didn't enjoy it. I hope you can get in touch with the author and at least let him know exactly what bothered you. Perhaps he could clarify the scene/scenes.
Ann

Thanks for taking the time to comment. When I get the chance, I will email you about the bit that irritated me. I have just downloaded Hero of Rome to my Kindle and will definitely read it.

Cozy - thanks for commenting. I think historical fiction is very difficult to get absolutely right and I suspect I am just being a bit precious about it.

Hi Richard, I made a mistake with the e-mail address, it should be dugjakson@aol.co.uk

Searching for the Ultimate Dating Website? Join to find your perfect match.