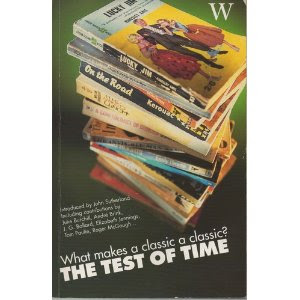 In 1999, to celebrate the impending millennium, Waterstone’s and the Arts Council of England published a collection of 47 pieces by various luminaries of the British literary, publishing and journalism scenes at that time.  Each contributor was asked to opine on what they thought it meant to be a “classic” novel and about their relationship to the classics.  They were also asked to nominate ten “essential” classics for the next 100 years and up to ten books that should never have been called classics.
Amongst the contributors were authors like Michael Moorcock, Kate Mosse, David Lodge and Christopher Priest, publishers and booksellers like Tim Waterstone and Stuart Proffitt, journalists such as Cosmo Landesman and John Humphrys and a few random annoyances like Vanessa Feltz and Julie Burchill.  The pieces ranged from the self-consciously contrary to the depressingly pretentious but the majority of the pieces were entertaining, serious and thought-provoking.
The question of what it means for a novel to be a “classic” is probably one of the most-debated questions in literature studies and I would guess that pretty much every book blogger who has been around for a while will either have addressed it themselves or read (and probably disagreed with) several posts on the topic.  From my own perspective, I am continually changing my position on the matter and don’t yet feel comfortable to set out my own views in a post.
As you would expect, a wide variety of views was expressed in The Test of Time.  Umberto Eco’s well-known definition was trotted out, there were variations on the theme of longevity plus meaning and there was even a view that a classic is whatever Penguin tells us is a classic –not a view I necessarily subscribe to but an interesting take on the issue.  Amongst the views were:
“’Classic’ means a novel of which we have formed a never-changing opinion which combines feelings of love for its flesh-and-blood and being moved by its greatness; when I pick it up I wan to read it now no matter how often I have already done so.” – Frank Delaney
“…they, more than others, appear to have something valid and exciting to say to successive ages and generations.” – André Brink
“My definition of classic………is obstinately rooted in the belief that the best literature is that which you carry in your heart from the moment you read it to the moment you die.” – Patrick Jansson-Smith
“A novel must stand the test of time and still be read enthusiastically generations after it was written to qualify for the dubious distinction of “classic”.  That is the only objective measurement: longevity.  Everything else is subjective” – John Humphrys
There were a heartening number of contributors who simply refused to accept a distinction between classic and non-classic, preferring to divide the world into great books, good books and bad books.  There were others who pointed out the fallacy of believing that everything ever written by a “classic” author must therefore be a classic book – surely even the likes of Dickens and Austen had an off-day.
If I had to try and boil down every contributor’s ideas to try and distill a common idea, it would be that a classic is a book that has longevity, that has messages or themes that are appealing to many different generations and that has an interesting plot.  There’s nothing revolutionary there and, indeed, it is pretty misleading to try and reduce 47 different views to a couple of bare-bones lines but there we go.
The best illustration of the difficulty in defining a classic and of the pretentiousness of those academic and artistic types who declaim magisterially that there is “a Canon” (one can almost hear the capital letter) is in the lists of essential classics and "classics that never were" that the contributors submitted.  Here is a list of a few of the books that were listed as essential classics for the 21st Century:
Lucky Jim – Kingsley Amis
– Emily Brontë
Don Quixote – Cervantes
The Heart of Darkness – Joseph Conrad
Howard’s End – E.M. Forster
The Ambassadors – Henry James
For Whom the Tolls – Ernest Hemingway
The Lord of the Rings – J.R.R. Tolkien
Sons and Lovers – D.H. Lawrence
Ulysses – James Joyce
And now, a list of some of the books that were cited by contributors as books that should never have been considered to be classics:
Lucky Jim – Kingsley Amis
– Emily Brontë
Don Quixote – Cervantes
The Heart of Darkness – Joseph Conrad
Howard’s End – E.M. Forster
The Ambassadors – Henry James
For Whom the Tolls – Ernest Hemingway
The Lord of the Rings – J.R.R. Tolkien
Sons and Lovers – D.H. Lawrence
Ulysses – James Joyce
Notice anything peculiar about the lists?  Yes, you got it.  They are absolutely identical.  Now, admittedly, this is not scientific and there are all sorts of counter-arguments to be made about why many of the books nominated by contributors ended up in both sections but I think it is an amusing illustration of the true subjectivity at the heart of this issue and also a refutation of the concept of The Canon of literature.  One curiosity did emerge, though.  There was widespread agreement that Sir Walter Scott’s work was pretty awful and should never, ever have been called “classic”.
Having read The Test of Time, I am still no closer to coming up with my final position on what constitutes a classic but it has given me much food for thought.
Posted by Falaise at 1:23 PM

I love that all the books on that list were cited by people as both classics and shouldn't be considered classics. That really just sums it up. I also like the thought that everything written by a classic author isn't necessarily a classic. I have a tendecy to read everything certain "classic" writers churned out, but sometimes I'm so disappointed. I shouldn't let that detract from the novels I loved from them. Great post!

After having read your post I've come to a conclusion of my own - to me, a classic is anything that belongs to the past that is now available to us in our present. Looking at the identical lists you've put up, it would seem every other definition is simply a difference in taste and opinion.:D

Come to think of it, even my definition doesn't cover the whole...for instance, what is considered pop lit today wouldn't fall under this category. But then again Dickens, Austen, Burney, Collins, Hardy, Scott...their literature must be considered pop lit of their time, right? I conclude that this is all very confusing. :-/